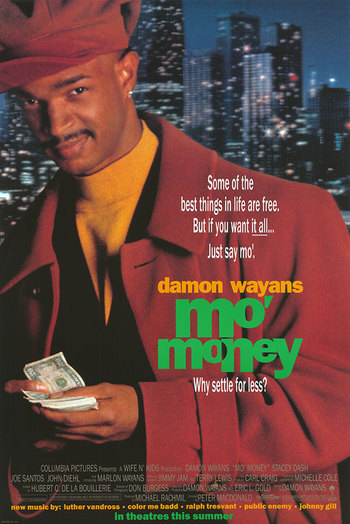 "This summer, why settle for less—When you can have Mo'."
—Trailer
Advertisement:

Mo' Money is a 1992 action comedy film directed by Peter Macdonald and starring Damon and Marlon Wayans, about two small-time con men from the inner city who find themselves lost in the dizzying world of honest-to-God fraud at the corporate level, and hilarity/drama ensues. The title references back to an otherwise unrelated Damon-Marlon routine from In Living Color!, which portrayed the duo as fencers parlaying their goods via cheap late night cut-rate "crazy prices" commercials. The movie also features early appearances of Harry Lennix as a milquetoast black businessman and Stacey Dash as the object of desire in a workplace love triangle.

Johnny (Damon) and Seymour (Marlon) are brothers in Chicago who get by on small scams and cons. Things go alright until Johnny meets Amber, an alluring and polished young woman who visits a Three Card Monte table run by Seymour. Attracted to her, and innately familiar with the game, Johnny whispers the right card into Amber's ear multiple times, ruining Seymour's table. Johnny discovers that Amber works at Diners Club office, and Johnny makes it his mission to infiltrate the company and get closer to her. Through an embellished resume, Johnny is interviewed and hired for a mail clerk position, which gives him ample opportunity to visit Amber and become familiar with other managers and office workers, including Tom (Lennix) and Keith Heading (John Diehl). While wooing the classy Amber, who is in a rocky relationship with Tom, Johnny discovers and becomes embroiled in a high-stakes embezzlement plot orchestrated by Heading that risks incriminating Johnny and Amber. The group of Johnny, Seymour, and Amber develop a plan to trick the embezzlers into exposing their scam, saving the company from a million dollar loss, winning Amber's heart, and raising Johnny's status.