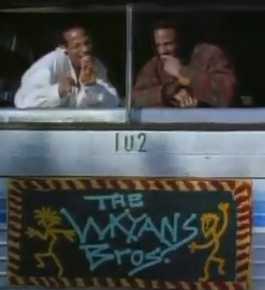 Marlon and Shawn.
We're brothers!
We're happy and we're singing and we're colored!
*beat*
Gimme a high-five!
(Shawn and Marlon look at each other in disapproval)
Alright, cut and print. Beautiful guys. Dynamite, that is...
(Marlon trashes the camera)
— Opening theme
Advertisement:

The Wayans Bros. is a sitcom that aired on The WB from 1995 to 1999, staring real life brothers Shawn and Marlon Wayans. The series' premise is pretty simple: the two brothers live in a shared one-bedroom apartment in New York. Said apartment is above their father's restaurant, called "Pops' Joint", which the two would visit on occasion during Season 1.

In Season 2, Pops moves his restaurant to the Neidermeyer Building, where Shawn manages to acquire a newspaper stand and works alongside Marlon. The rest of the series takes place here. The newspaper stand comes with a security guard (Lou in the second season, Dee for the remainder of the show) who becomes a close friend of theirs. The boys also move into a brownstone which still had one bedroom.