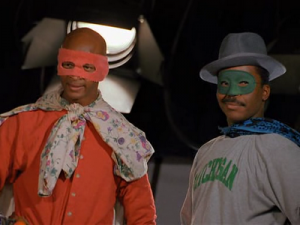 What you'd get if Kick-Ass became a comedy film.
Advertisement:

Blankman is a 1994 superhero parody film, directed by Mike Binder. It features a nerdy amateur inventor trying to start a superhero career.

Darryl Walker (Damon Wayans) is an appliance repairman with a gift for inventing but has a tendency to observe life through rose-colored glasses, failing to notice the urban decay, political corruption and police indifference surrounding him (not even realizing that his flat is right next door to a crackhouse), in stark contrast to politically active Grandma Walker (Lynne Thigpen), his own grandmother. Grandma is a key figure in the political campaign of mayoral candidate Marvin Harris (Christopher Lawford), who is running on an anti-corruption platform; this results in Grandma's assassination by order of local mob boss Michael "The Suit" Minelli (Jon Polito).

Finally aware of what's going on around him, Darryl becomes determined to fight crime, at first in a low-key way (helping an old woman against a mugger), but he quickly decides this is not enough. So he creates an arsenal of weapons and gadgets, puts on a ridiculous suit and starts his one-man crusade. He is soon joined by his brother Kevin (David Alan Grier), a news cameraman with a decidedly down-to-earth view. Kevin acts as Darryl's advisor, determined not to let his brother get killed.

The cast is soon rounded by a love interest to both brothers, television reporter Kimberly Johns (Robin Givens). The press dubs Darryl as "Blankman." At first, Blankman is merely helping civilians and facing various thugs, but then takes his first high-profile case: Minelli's gang has taken Mayor Harris hostage in a bank, threatening to detonate explosives if their terms are not met. Blankman intervenes, sends the gang running... but fails to disarm the explosives. The popular Mayor is killed, the bank is destroyed and Blankman barely escapes with his life.

Now the public turns on the failed hero and Minelli is out for blood. He abducts Kimberly to lure Blankman to his location. This motivates even Kevin to put on a superhero costume, as imaginatively-named sidekick "Other Guy." All is set for a final battle.

The film was intended to be an Affectionate Parody of various films portraying Superman and Batman, but reviewers noted it was "surprisingly mild on good laughs." The deaths of Grandma and Mayor Harris were hardly humorous material, and several other scenes were often amusing but not laugh-out-loud material. Much of the better humor curiously came from Straight Man Kevin's reaction to extraordinary situations. The film was not particularly successful critically or commercially, grossing just $7,941,977 in the U.S. box office. It was only the 122nd most successful film of its year. The film seems to be better remembered by those interested in the entire superhero film genre, rather than the general audience.