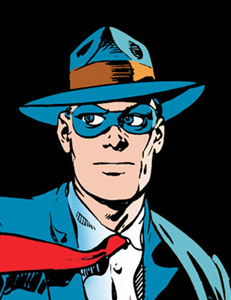 "That thing on his face, it's a mask. He wears it in case some Earthling sneaks onto the Interceptor — while we're in space, mind you — and goes 'Ha ha! The Green Lantern on my planet is Hal Jordan! I'm telling everyone!'"
— Kilowog on Hal Jordan's mask, Green Lantern: The Animated Series
Advertisement:

A type of mask that covers only the eyes and the area around them. Often called a "Halloween mask" by people unaware of the technical term. This style of mask originated

in Venice, Italy, for use during Carnival, but now is strongly associated with the superhero genre.

Its usefulness as a disguise varies; in Real Life, while covering the eye area is surprisingly effective against people who don't know the masked individual personally, it doesn't obscure enough of the face to fool anyone who's familiar with them out of costume. Suspension of Disbelief may be required when the hero is rescuing close friends or family members who aren't in on the secret.note Sometimes, once they're out of danger, the family member (especially the hero's parents) may reveal that they weren't fooled for a moment.

In animation and comics, these masks will frequently be Expressive Masks that somehow bind to the wearer's face with no means of visible support. Theatre-savvy readers might assume the wearer is using spirit gum, but the mask often goes from drawer to face without any adhesive applied. Sometimes this effect is achieved by having makeup of the same color as the mask applied to the skin visible through the eye holes.

A domino mask will often compose the third part of Coat, Hat, Mask. For villains, a domino mask is also one of the standard accoutrements of the cartoon burglar. They are also commonly associated with raccoons, famously sneaky and thieving animals whose eye markings resemble the domino mask. Bonus points if the mask also removes the wearer's irises and pupils. For other less heroic variants, see Malevolent Masked Man. A Sleep Mask is generally a similar sort of shape, only without the eye holes. The glasses involved in literal Clark Kenting, by disrupting the features around the eyes, derives from a similar idea.

Alternative Title(s): Only My Eyes Need A Mask