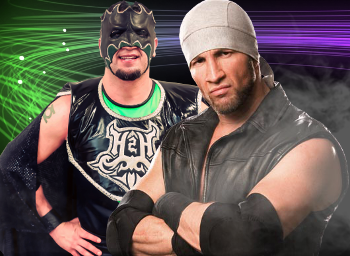 "Stand back, there's a hurricane coming through!"
Advertisement:

Gregory Shane Helms (born July 12, 1974) is an American professional wrestler best known for his work in WCW as Shane Helms and in WWE as The Hurricane and as Gregory Helms. He debuted in 1991 when he was only 17 working various Carolinas independent promotions, including the Hardys' OMEGA promotion. He signed with WCW in 1999 and was teamed with Shannon Moore and Evan Karagias as 3-Count, a wrestling Boy Band. They feuded with the Jung Dragons, and, after WCW died in 2001, WWE picked up Helms' contract. He debuted as part of the InVasion/Alliance angle and was repackaged as the Hurricane, a superhero parody gimmick. He stayed until 2010, when he went back to the independents. Among his in-ring achievements, he is a 3x WCW/WWE World Cruiserweight Champion

"Eye of the Tropes":