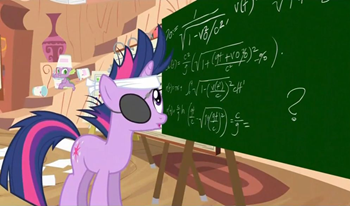 E = MC Hammer not good enough for you? Twilight Sparkle does time dilation

.
"And here we go, another reference no one gets but you. Consider your audience once in a while, huh?"
— Daru, Steins;Gate
Advertisement:

A joke or tidbit meant for people knowledgeable in a certain field. The rest of the audience doesn't get it, but it's usually subtle enough for them not to care. This is the non-age-related counterpart to Parental Bonus.

Genius Bonuses are most often seen in series with a direct connection to its audience, especially New Media, as they can expect their audiences to be sufficiently focused that most of them will recognize an in-joke.

If this goes too far, it falls into Viewers Are Geniuses, so it has to be applied carefully. If it seems to be a byproduct of necessary research into the story, setting or plot, then the author is showing their work. Understanding one of these may lead to Fridge Brilliance.

Whenever a series of binary or two-digit hex codes are shown, chances are they'll spell out something when decoded as ASCII text.

A Super-Trope to Lampshaded the Obscure Reference.

Can overlap with Reference Overdosed.