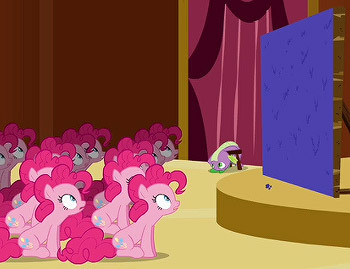 Fun for the whole magically cloned family!
Snowman: What do you think they do for entertainment in this town?
Bandit: Oh, I don't know, sit around and watch the cars rust?
— Smokey and the Bandit
Advertisement:

Our parents and grandparents did not have as much entertainment media available as we do When They Were Our Age. Fine. So they had to do other things instead. OK. But often fiction will use this as a source of humor with the activities engaged in by previous generations verging on the utterly moronic.

From the sarcastic expression "as exciting (interesting, fun, etc.) as watching paint dry".

A specific form of Incredibly Lame Fun. Not to be confused with sending a badly behaved child to sit in the corner and stare at the wall as punishment. Compare Washy Watchy.