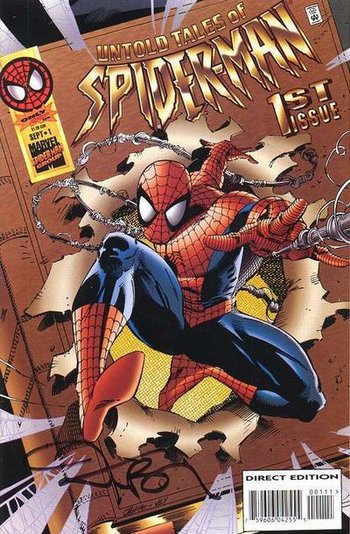 Untold Tales of Spider-Man is a Spin-Off of the Spider-Man series of Comic Books. Written by Kurt Busiek (with Tom DeFalco and Roger Stern each co-writing the last few issues with him) and penciled by Pat Olliffe, it featured new stories set in the early days of Spidey's crime-fighting career, interweaving its plotlines with those originally created by Stan Lee and Steve Ditko.

The title was part of an experiment by Marvel Comics to publish a number of new titles for only 99 cents, in hopes that the low price point would attract new readers who might have been put off by the higher prices for comics at the time. It ultimately ran for 26 issues (#1-25, with an issue #-1) from September 1995 to October 1997, as well as two annuals. A follow-up one-shot by Busiek and Stern, Untold Tales of Spider-Man: Strange Encounter, detailing Spider-Man's first team-up with Doctor Strange, was released in August 1998.

A three issue mini-series titled Amazing Fantasy also written by Busiek and painted by Paul Lee served as a direct followup to the last issue of the original Amazing Fantasy title and a prequel to the first issue of The Amazing Spider-Man, even continuing the original numbering of Fantasy, and was released from December 1995 to March 1996, showcasing Peter's first steps into becoming a superhero. It is considered a spinoff of the main Untold Tales comic and included in collections of it, with some events that occur in the mini even getting mentioned in the main comic.