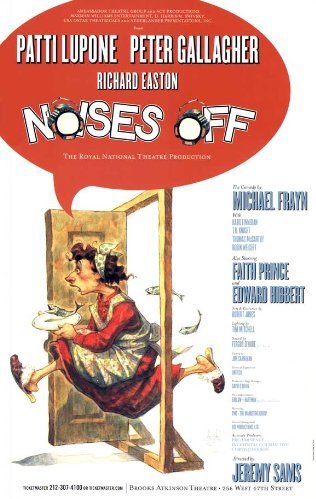 Not... exactly a textbook farce, not exactly a backstager, really not even exactly a play, the 1982 comedy Noises Off might perhaps be best described as a repeating exploration of everything that can go wrong in live theatre. All at once. With perfect, split-second timing. Done right, this work of staggering theatrical genius can make you wet your pants — either from laughing too hard (if you don't have extensive backstage theatrical experience) or from horrified flashbacks (if you do).

The play is in three acts; the first depicts what happens on stage during the dress rehearsal for Nothing On, a Feydeauesque door-slamming sex farce that's opening in mere hours, with a cast that hasn't had the rehearsal time they'd like, one of whom is not all there, one of whom is even less there, one of whom has trouble with blood, another of whom has trouble with finishing sentences, and, of course, with sardines. We see the Show Within a Show proceed, with the occasional pause for corrections, mistakes, errors, misunderstandings, rumors, and of course sardines.

The second act shows us backstage at the same play after it's opened and has been running a while, when all of the petty jealousies, rivalries, irritations, and pet peeves have been well stoked and are in full flower. Axes, sardines, and whiskey all make their appearances, and part of the charm at this point is watching the actors attempt to kill each other while still trying to make it out onto the "stage" on cue.

The third act then wraps everything up with another iteration of the first act, as the audience would see it, after the cast has been on the road for far too long, and everyone hates each other.

Written by Michael Frayn (who among other things also wrote the screenplay for the John Cleese movie Clockwise), who was inspired to write a "behind the scenes" farce after watching rehearsals and performances of his 1970 anthology play The Two of Us, particularly the final play in which two performers (Richard Briers and Lynn Redgrave in the original West End production) play multiple characters each and must make lightning quick costume changes; Frayn decided the view from behind the stage was funnier than the view from in front of it.

A film version was released in 1992, directed by Peter Bogdanovich and featuring an all-star cast headed by Michael Caine as Lloyd the director, with Carol Burnett, Christopher Reeve, Denholm Elliott, John Ritter, Marilu Henner, and Nicollette Sheridan as the cast of Nothing On and Julie Hagerty and Mark Linn-Baker as the overworked backstage crew. Marty Kaplan's screenplay adds a Framing Device about Nothing On going to Broadway, and is presented as a flashback as Lloyd describes what a nightmare the show has been; it also gives the plot an actual ending.

"Noises Off" Has Examples of the Following Tropes:

The Show Within a Show "Nothing On" Has Examples of the Following Tropes: