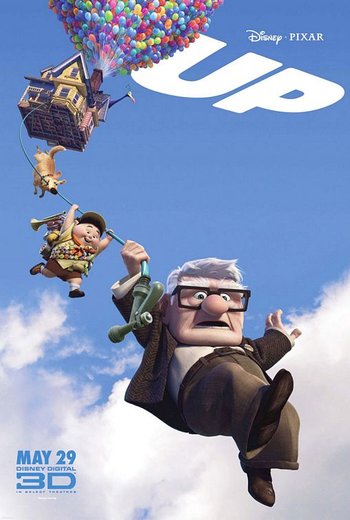 Side effects may include sobbing uncontrollably for the first ten minutes of use.
"Adventure is out there!"
—Charles Muntz, later borrowed by Ellie
Advertisement:

Up (2009) is an animated film from Pixar Animation Studios. Directed by Pete Docter (Monsters, Inc.), it is the story of a septuagenarian named Carl Fredricksen (Edward Asner) who had promised his wife, Ellie, that they would one day have an adventure and move to Paradise Falls in Venezuela like their childhood hero, Charles Muntz (Christopher Plummer). However, life got in the way of them doing it — repeatedly — and she passed away before they could. Carl, guilt-ridden, shuts himself off from society in the house they built together. When land developers threaten and scheme to destroy their home, Carl decides to take action and fulfill his promise to his wife. Being a retired balloon man, he ties thousands of helium balloons — the leftovers of his old trade — to his house and sets off for Paradise Falls. He has an accidental stowaway in the person of Wilderness Explorer Russell (Jordan Nagai), who has been trying to earn his "Assisting the Elderly" badge by helping Carl.

Traveling thousands of miles in a house lifted by helium balloons is probably the least adventurous thing Carl and Russell do...

Up is Pixar's tenth film and their first full-length 3-D film. It has the honor of being only the second animated film to be nominated for Best Picture at the Oscars, following Beauty and the Beast; it's also the first fully-CGI film to be honored with the nomination. While the film didn't win that award, it did get Pixar another Oscar for Best Animated Feature Film, as well as the Oscar for Best Original Score for composer Michael Giacchino.

For information about the short Partly Cloudy, which played before the film, as well as the two spinoff shorts Dug's Special Mission and George & A.J., see Pixar Shorts. An animated series of shorts about Dug and Carl as they reside in suburbia, called Dug Days, premiered in 2021 on Disney+.

For the unrelated Granada/BBC documentary series, see Up. Also not to be confused with the 1976 Russ Meyer film of the same name, which is... not for children to say the least.

open/close all folders
A-F
G-L
M-R
S-Y
This looks like the end of the arti—SQUIRREL!
Feedback

In an attempt to get rid of Russell, Carl asks him to find and catch a bird called a "snipe". Russell believes this and willingly goes out to find the snipe in order to get his last Wilderness Explorer badge.

In an attempt to get rid of Russell, Carl asks him to find and catch a bird called a "snipe". Russell believes this and willingly goes out to find the snipe in order to get his last Wilderness Explorer badge.