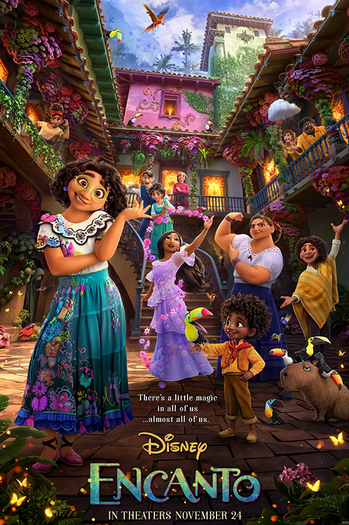 Magical house. Magical family.
"Gift or no gift, I am just as special as the rest of my family."
— Mirabel Madrigal
Advertisement:

Encanto (Enchantment) is the 60th entry in the Disney Animated Canon. It is directed and written by Zootopia directors Byron Howard and Jared Bush, as well as Charise Castro Smith, and featuring songs by Lin-Manuel Miranda.

Somewhere in the mountains of Colombia, the Madrigal family lives in a magical house in an isolated community called an Encanto. Each member born into the family possesses a unique power… except for 15-year-old Mirabel (Stephanie Beatriz), who has no powers. But when it becomes apparent there's something endangering the very magic surrounding her home, she learns that she may be her extraordinary family's only hope.

The film was released on November 24, 2021 preceded by the short film, Far From The Tree. Following a 30-day theatrical window, it arrived on Disney+ on December 24. Not directly related to the Disney film Enchanted despite the similarity in the title and both films are released by said studio.

Example of:
Artifact of Hope