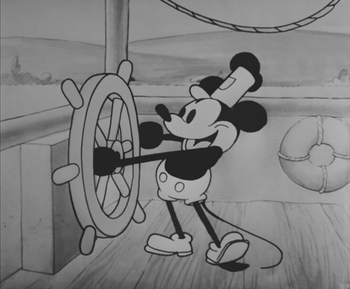 "Oh, that's old!"
"By 1927-1928, audiences would groan when a cartoon came on. Animation had worn out its welcome. The novelty was gone. If sound hadn't come in, the cartoon would have vanished."
— Shamus Culhane on why "Steamboat Willie" was such an important film for animation
Advertisement:

"Steamboat Willie" is a black-and-white Mickey Mouse short released on November 18, 1928, and is the cartoon that kicked off what we have come to know as The Golden Age of Animation. It is notable not for being the first Mickey Mouse cartoon (that honor goes to Plane Crazy), nor for being the first sound cartoonnote  Fleischer Studios' 1924 Song Car-Tune "Mother, Mother Pin A Rose On Me" holds that honor, and Paul Terry's 1928 short "Dinnertime" was released just a month before Willie hit the theaters, but for being the first cartoon with a completely post-produced soundtrack of music, dialogue, and sound effects. Namely, it was the first cartoon to get it right, bringing The Silent Age of Animation to an end.

The short itself begins with the iconic image of Mickey Mouse at the mast of a steamboat, whistling to himself. The villain, Pete, the real captain of the ship, steps in and hassles Mickey for not doing his job. The steamboat docks to pick up a cargo of animals, and Minnie Mouse rushes to board the ship as it leaves the dock. Mickey manages to get her on board (by using a hook to pick her up by her panties no less), but an Extreme Omni-Goat eats her ukulele and her sheets of music. Somehow Mickey and Minnie are able to make the most of the situation by cranking the goat's tail, which causes it to play music. The ensuing scenes involve Mickey abusing animals in order to add to the music, by swinging a cat by its tail, choking a duck, pulling on the tails of baby pigs and then playing the mother pig's nipples. Animal abuse aside, this scene readily showed off what adding sound to cartoons could do. Pete gets angry at Mickey for slacking off again and forces him to peel potatoes. The short ends with Mickey throwing a potato at a parrot for laughing at him.

The short was revolutionary for its time, and its copyright status in the US is still up in the air – in 1998, Disney successfully lobbied the U.S. Congress to extend its copyrightnote  (which was originally set to expire in 2006, upon the 40th anniversary of Walt's death) to 2023 (this is part of the reason that the Copyright Term Extension Act is occasionally derisively called the "Mickey Mouse Protection Act"), though by the original law it should have fallen into the public domain years ago. It may in fact already be in the public domain due to errors in the original copyright formulation, but don't let Disney hear you mention that.note  Also don't let Disney hear you mention that even if the copyright for this cartoon expires, they won't lose control of their classic characters, as they are protected by trademarks, which never expire as long as they are kept active. Disney knows this, as at least one Donald Duck short has fallen into the Public Domain (and Mickey short "The Mad Doctor" may have as well). In several other countries, including Canada and Russia, the short has been in the public domain for several years.

In 1998, 70 years after its debut, the short was chosen for preservation in the National Film Registry. It can be watched on Walt Disney Animation Studios' official YouTube channel here

The scene of Mickey piloting the steamboat and whistling, which became one of the most popular pieces of Walt Disney's animation.

The scene of Mickey piloting the steamboat and whistling, which became one of the most popular pieces of Walt Disney's animation.