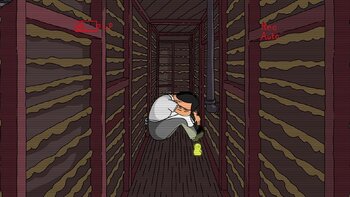 You understand me don't you? Nightlight?
Mike: Turns out... someone's living in the walls.
Jay: Whaaaaaat!
Mike: Oh my gaaaaaawd!
— "Mike Pitches A Horror Movie

You've heard of rats in the walls, but what about people?

Inside The Walls is when a character finds themselves between the walls or ceilings of a building. Reasons for this include:

The trope is often in the comedy genre, since the visual act of being stuck in a wall is so absurd. Another version is when someone is above the ceiling to ogle others creepily, which usually ends with the person breaking through the ceiling. In rare occasions, it appears in the horror genre and the character who is hiding does so insidiously. While this can be comic, that falls under Secret Squatter.

In classic Hollywood fashion, the walls are usually spacious enough for the person to walk around freely. There may even be abundant light that allows them to see perfectly.