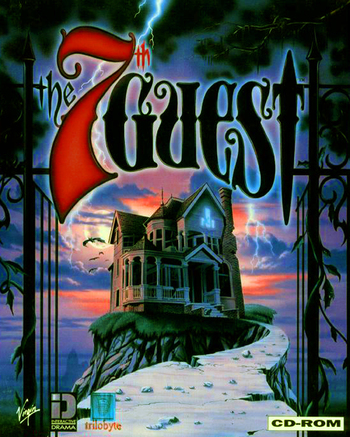 "Old Man Stauf built a house, and filled it with his toys
Six guests were invited one night, their screams the only noise
Blood inside the library, blood right up the hall
Dripping down the attic stairs — hey guests, try not to fall
Nobody came out that night, not one was ever seen
But Old Man Stauf is waiting there — crazy, sick, AND MEAN!"
— Children's rhyme heard around the town of Harley, New York
Advertisement:

The story of the 1993 horror-themed puzzle-adventure game The 7th Guest begins during the Great Depression: wandering drifter and thief Henry Stauf kills an old woman on her way home from choir practice, sinking to a new low even for him. That same night, he has a dream about a beautiful doll, a replica of which he carves the next day and offers to a local barkeep in exchange for room and board. Stauf continues to make dolls and other toys based on his visions; when they become a high-demand item, Stauf becomes a very wealthy man.

Then, at the height of Stauf's success, a mysterious illness soon kills many of the children who own his toys. Stauf builds a remote mansion based on another dream, near the town of Harley (also called Harley-on-Hudson), New York, then moves into it and retires from society for good. The years pass on, and when nobody knows for sure if Stauf is still alive, he invites six guests to his mansion for a dinner party. The invitation promises to grant the wishes of whoever solves all of his mansion's puzzles. But the puzzles themselves are little more than a means to an end—clues to what Stauf wants and what he wants the guests to do for him.

The player controls an unremarkable amnesiac who wakes up in Stauf's mansion, which is the setting for the entire game, and tries to figure out how he ended up there. As this character wanders the mansion and solves logic puzzles (some of them suspiciously illogical) to advance the story, Stauf becomes an ever-present menace by taunting the amnesiac with clues and expressing displeasure when a puzzle gets solved.

The 7th Guest was one of the first games to make use of CD-ROM technology, which gave it a reputation as a technical marvel for its day. Critics and fans considered the prerendered CGI graphics and Full Motion Video as state-of-the-art technology for a videogame; computer manufacturers frequently used the game to show off the capabilities of a CD-ROM drive. 7th Guest has a fairly complex plot sitting underneath all the technical wizardy and its non-linear gameplay, but without a FAQ of some kind that details how to trigger events in a logical progression, the average player could believe the game doesn't have much of a plot at all. The game offers a hint book in the library of the house that offers clues on how to solve the game's next puzzle. When it is used for a third time, it completes the puzzle for the player so they can continue the game. (The game's manual says "consequences" could occur for using the hint book, but a player can use it without penalty for all but the last puzzle.)

The 7th Guest was successful enough to receive a sequel in 1995. The 11th Hour takes place sixty years after the events of its predecessor and follows the story of reporter Carl Denning, who visits Stauf Manor to look for his lost producer and soon becomes another victim of Stauf's wicked schemes. 11th Hour plays exactly the same—wander the mansion, solve puzzles, and watch scenes that advance the plot—but features multiple endings as opposed to the first game's sole ending.

Another planned sequel, The Collector—which would have featured Stauf as a museum curator—vanished when developer Trilobyte went out of business. Before Trilobyte closed its doors, it published a Gaiden Game to the series, Uncle Henry's Playhouse, that compiled puzzles from The 7th Guest, The 11th Hour, and spiritual sequel Clandestiny. That game was sold only through mail-order; it sold only twenty-seven copies in the US and 176 total copies worldwide.

rose from the grave and ported both 7th Guest and Rob Landeros' Interactive Movie-meets-Psychoanalysis Session Tender Loving Care to the Apple iOS. After solving the problems with porting to newer hardware, The 11th Hour also became available for purchase.

and plans to release it across multiple platforms in 2014. In an attempt to secure funding for the sequel (titled The 7th Guest 3: The Collector), Trilobyte kicked off a Kickstarter project on Halloween 2013

, but the campaign was ultimately unsuccessful.

A paperback novelization of the original game's backstory was shipped with the 7th Guest CD; it is now available on Amazon Kindle.

In the summer of 2015, Trilobyte once again announced a new sequel

, The 13th Doll. This game was originally a fan creation by Attic Door Productions; they have now partnered with the original Trilobyte team to make it an official sequel. Tad never recovered from his experiences in Stauf's manor; as an adult, he remains confined to a mental institution. His new doctor thinks he needs to return to the manor to confront his demons once and for all. But the doctor doesn't realize just how real those demons are.... The game was released on Steam on Halloween 2019.

The 7th Guest and its sequels provides examples of:

No one knows what happened next. There's no one left to say.
But if you should see Old Man Stauf, get on your knees and pray.