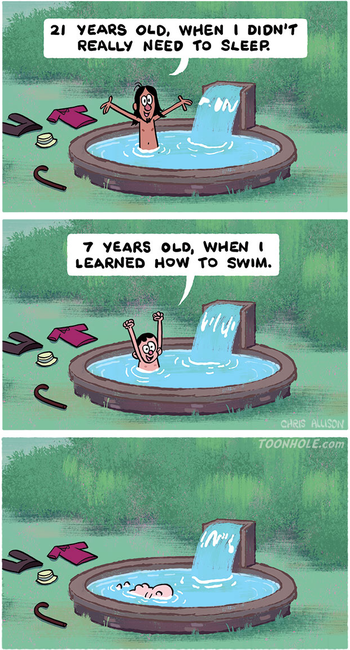 Yet he doesn't know when to get out.

"We'll all get younger and younger until we suffer a Fate Worse than Death: pre-life! Then death."
— Professor Farnsworth, Futurama, "Teenage Mutant Leela's Hurdles"
Advertisement:

The Fountain of Youth seems an attractive idea, especially for the elderly; you get to wind back the clock and prolong your life. However much like a drug, it can come with dangers if overdosed. If it has a continuous effect, the youth could make someone so young they regress to before they were born, becoming a fetus exposed to the world and at severe risk of dying. Or worse, regressing beyond that to the point that they don't even exist!

Maybe it's because someone spent too much time in the Fountain of Youth, causing it to go horribly right. Or the youth continues to decrease someone's age even outside of it. If someone suffers from Merlin Sickness, this might be how it ultimately kills them. Could be considered a form of Harmful Healing, with the "healing" part being healing away age.

When someone's birth is literally undone instead of reverting before it, it's a Ret-Gone situation. Contrast Rapid Aging, where someone rapidly ages and can be at risk of becoming too old to live rather than too young, or No Immortal Inertia, where someone reverts to their true ancient age and dies because of it. This might be part of what makes the Devolution Device so dangerous, though it usually "just" sending someone back down the Evolutionary Levels.

Only in a children's show will Death by De-aging be depicted as a simple "pop".

Only in a children's show will Death by De-aging be depicted as a simple "pop".