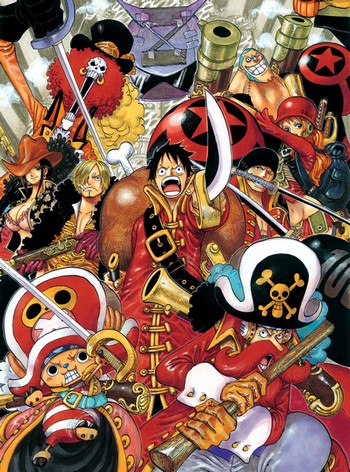 I don't give a damn 'bout my reputation
You're living in the past, it's a new generation
Advertisement:

One Piece Z is the 12th film in the long running anime and manga franchise, One Piece. Released on December 15th, 2012. It's the first One Piece movie to be set after the time skip.

As the title suggests, it focuses on Z, a former Marine Admiral who now leads his own version called the Neo Marines, with the intent of wiping out every pirate on the Grand Line. To do this, he has stolen one of the Marines' trump cards, the Dyna Stones (stones that create explosions with immense destructive power when exposed to air) for his own ends. The Straw Hats unwittingly get involved when Z attacks their ship while crossing their path, gaining Luffy's anger and leading up to a battle that will determine the fate of the Grand Line.

Eiichiro Oda has stated that Z was the toughest challenge the Straw Hats had ever faced at that point in time. Kizaru and Kuzan (formerly known as Admiral Aokiji) appear in the film as well. Surprisingly Avril Lavigne does two of the movie's theme songs

which are covers of Joan Jett's "Bad Reputation" and Nickelback's "How You Remind Me".

See also Z's Ambition Arc, a short mini arc of the anime that takes place before and leads into this movie.

which came to pass on September 30th, 2014, making it the third One Piece film (behind Episode of Alabasta and One Piece Film: Strong World) to be released in English. Here's a trailer for the English dub.

The English dub came complete with the Avril Lavigne covers.note May not sound like a big deal. But the previous major film, Strong World had to omit the theme, "Fanfare", due to Mr. Children not relenting the rights to it. It's likely this was allowed since Avril is a native to the U.S and thus likely to attract more of a English-speaking audience..

One Piece Z contains examples of the following tropes: