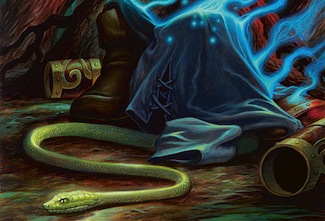 I ducked around a corner into the mouth of an alley, then kicked off my slippers, the only parts of my dress that weren’t spun from fox-magic. (Magical garments never lasted beyond a seduction. My mother had remarked that this was the fate of all human clothes anyway.) I loved those slippers, which I had purloined from a rich merchant’s daughter, and it pained me to leave them behind. But I could get another pair of slippers later.
— Foxfire, Foxfire, by Yoon Ha Lee
Advertisement:

Items of clothing have a way of sticking around unchanged, even if their wearer is shrunken, transformed, or outright disintegrated in front of the viewer's eyes. This presentation is usually used as a visual cue to drive home the extremity of what's just happened to the victim. Simple gravity may pile the clothes into a heap, or convenient magic scatter them a moment later, to Hide the Evidence. In other instances, the clothes are ripped apart during the transformation, leaving them in tatters. Popping Buttons may occur at the very least.

In Shapeshifting, this can be an effect of Animorphism, or as simple as Just Woke Up That Way. Shapeshifting excludes clothing. Naturally. Also a frequent pairing with the Baleful Polymorph or Incredible Shrinking Man. Since the clothes stay where they are, if the victim has survived the event, it's likely to lead to Naked on Revival. However, works unwilling to depict nudity may nonetheless ignore the effect on reversal, in favor of returning the character to human form fully clothed. In some forms of shapeshifting, in fact, the character must get his hands on the original clothes to change back.

This is also seen in Sizeshifter gone wrong, ascending to a higher plane of existence, or the effects of a Fountain of Youth.

Typically onscreen; in any case, the cause of the loss of clothing is revealed to the audience and characters present in the scene. May trigger a foreboding Empty Piles of Clothing moment if discovered later by a character, without this context. In more comedic situations, characters obliviously transformed into larger forms may initially assume their clothes Shrunk in the Wash. Two characters who know they're about to go through a "Freaky Friday" Flip or a Physical Attribute Swap may preemptively exchange outfits to avoid any issues.

Notice: As it can be used as a possible DEATH TROPE, there can be SPOILERS here. Beware!