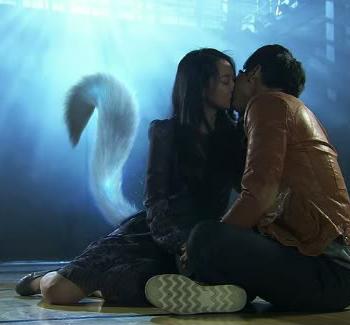 How'd he wind up with a fox like her?
It's... complicated.
Advertisement:

A folklore trope which appears throughout the world a lot. The story typically goes something like this:

"A man spies a group of magical shapeshifters bathing. Seeing that they must shed their creature skin when they transform from a creature into a beautiful woman, he steals one of the skins. Unable to transform and join her sisters, one poor creature is left behind. The man makes the abandoned one his wife. One day, many years later (sometimes after bearing children), she finds the skin and may finally return to her kin. Dilemma on whether or not she will may or may not ensue."

It's a motif, sometimes known as "The Animal Bride" tale, that crops up all over the world. Though the details of the story are different, the core story is more or less the same.

A popular variation has a creature fall in love with a human and willingly take on human form to marry him. But when he finds out about it, often by breaking a promise, she must leave him. A lesser but still plentiful one is where he gives back the skin, and she is grateful — which is good, because there is invariably a villain (often her father) whose tasks for him are impossible without her advice.

Occasionally, this is used as an introduction to another Fairy Tale type, The Quest For the Lost Wife. It is common enough to be its own subtype, The Swan Maiden.

A Gender Flip version of this Fairy Tale has the heroine wooed by an animal; once she consents to marry him, he turns into a man at night. But when she violates a prohibition — frequently burning his animal skin or actually seeing him in human form — he must leave her. This results in the Fairy Tale type known as the Search for the Lost Husband. Unlike the female version, the male's Involuntary Shapeshifting is usually the result of a Curse.

The Wonder Child may be animal in form, but the wedding usually inaugurates a period where he can switch back and forth, or completely breaks the form.

Red from Overly Sarcastic Productions, explains what this trope is, and then proceeds to retell a few examples, including the Swedish Swan Bride tale.

Red from Overly Sarcastic Productions, explains what this trope is, and then proceeds to retell a few examples, including the Swedish Swan Bride tale.