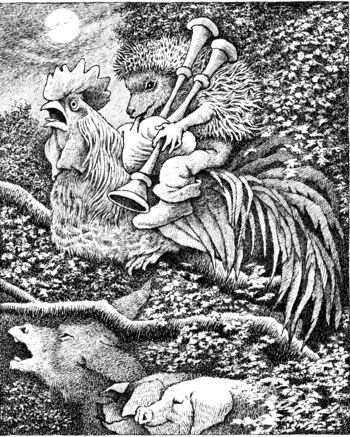 One of the lesser-known stories collected by The Brothers Grimm.

A wealthy peasant has one grief in life: he and his wife have no child. One day, he has enough of being mocked by the other peasants for this, and declares that "I will have a child, even if it be a hedgehog." Sure enough, his wife gives birth to a child whose top half is that of a hedgehog and whose bottom half is that of a boy. Baptized "Hans the Hedgehog",note  or "Hans my Hedgehog"; in the original German, the title of the story is "Hans mein Igel" the baby cannot be nursed by his mother because of his quills. Given a bed of straw to sleep on behind the stove, Hans lounges around there for eight years until one day, he asks his father to bring him a set of bagpipes from the fair. Then Hans tells him to have the rooster shod at the blacksmith's, promising to leave and never come back. His father is only too happy to do so and Hans leaves riding his rooster, taking some pigs and donkeys with him as he leaves. He spends years in the woods, tending to his growing herd and making beautiful music on his bagpipes while perched on his rooster on the branch of a tree.

Time passes and two kings find their way into the woods; both of them notice Hans and ask him to show them the way out of the woods. Before doing so, Hans extracts a promise from each of the kings that they will give him the first thing they meet when they come home in exchange. As it happens, each king is greeted by his daughter on returning to the royal palace. The first king tells his daughter about his encounter with Hans but assures her that he does not intend to uphold his empty promise. The princess tells him that this is a good thing, for she would not have gone with Hans anyway. The second king is dismayed, but his daughter tells him that if Hans comes, she will go with him for the love of her old father. In time, Hans the Hedgehog sets off to claim his reward. Some are about to learn that Hans is not one to be crossed.

Although this at times farcical story seems to be trying to teach a moral, its resolution is so crude, violent and sexist that its original plot is essentially unusable for modern children's books. Nonetheless, some adaptations have been written.

The original can be read here