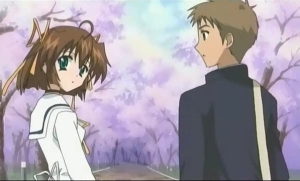 Asakura Junichi is a 15 year old boy who lives on the (fictional) island of Hatsunejima, where the sakura trees blossom all year through. He seems pretty ordinary, but he has magical powers, which he himself views as fairly limited. He can see the dreams of other people and produce Japanese sweets out of the blue. He has a sister, Nemu, with whom he attends the same class in middle school. Although people think they are twins, they are actually not blood relatives. Their bond is very strong, inciting people to think that they are lovers.

One day a new transfer student is welcomed to the school: Yoshino Sakura, Junichi's cousin, who returns home after having been in the USA for six years. Sakura immediately stirs things up since she is hellbent on letting Junichi keep his childhood promise to her. This is especially troublesome, since things between Junichi and Nemu have started to become much more serious in the time since Sakura left—and Junichi appears to have promised something to Nemu as well.

The story gets even more complicated when it is uncovered that the old, big sakura tree in the middle of Hatsunejima holds a magical grip on the island and its inhabitants. As the significance of its influence becomes clear, a dramatic story slowly unfolds, so what at first started as a lighthearted harem comedy becomes much more serious and intense as the series progresses.

The anime, which is called in full D.C. ~Da Capo~, is based on a Visual Novel that was released by Circus in 2002. The anime itself was aired in 2003. A sequel, called D.C.S.S.: Da Capo Second Season, has been released in 2005 and yet another one, called D.C.II ~Da Capo II~, set two generations later, was aired in 2007. The sequel's success incited yet another sequel in 2008, called D.C.II S.S. ~Da Capo II Second Season~. There is also a spinoff featuring Sakura Yoshino (Time Paladin Sakura) as a Magical Girl; and an otome game called D.C. Girl's Symphony ~Da Capo Girl's Symphony ~ which is set at the same time as Da Capo II, and even features Nanaka as a minor character.

The name "Da Capo" is a musical term, meaning "from the top" and refers to the often looping story lines in the original game.

The series' success hinges largely on the well-balanced characters and interesting plot lines combined with nice, classically-tinted music, since the animation quality doesn't generally rise far above average. For viewers who like a good mix of silliness and well-written melodrama, the series is definitely worth a watch.

Please note: Examples from the visual novels should be listed for the clean versions only.