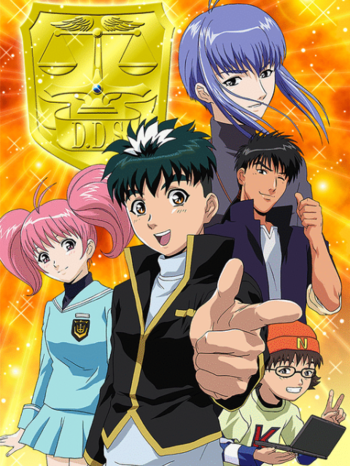 Detective School Q or Tantei Gakuen Q is a 22 volume manga by Seimaru Amagi (who also wrote The Kindaichi Case Files) that ran in Weekly Shonen Magazine from 2001 to 2005. It was adapted into television in 2003, albeit incompletely, spanning a mere forty-five episodes covering only the beginning of the manga, leaving out most of the plot. Later, the series was also adapted into a live action drama. It was also followed in 2007 by a one-volume manga called Tantei Gakuen Q Premium, which is a sequel to the original one.

This story involves a group of students called the Q class of Dan Detective School, founded by Retired Badass Detective Morihiko Dan, the best detective in Japan. These students, led by Kyū Renjō, form a Five-Man Band and are tasked to solve seemingly unsolvable mysteries, as well as to battle a criminal organization led by Pluto who had a past with Morihiko Dan and a mysterious connection with one of the students...