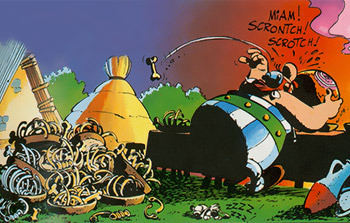 And that's just the appetizer!
"This... this girl's stomach is a Cosmos unto itself! It's connected to the void of the universe!"
— Eating Contest Judge (on Fuu), Samurai Champloo
Advertisement:

Characters (who may or may not be fat) that regularly eat enough for an entire football team, often devastating the whole table — and sometimes entire restaurants in their insatiable hunger. Often with a speed-eating technique that makes food seem to vanish spontaneously from the plate. Primarily a comedy trope, a common sight gag with these kinds of characters in cartoons or anime is having piles upon piles of plates and bowls stack up as the character chows down. Cut a Slice, Take the Rest is a common joke involving this type of character, as is I'll Take Two Beers Too.

Extreme Omnivores and people with eating related powers tend to be Big Eaters by default. Large characters, such as the Big Fun and Boisterous Bruiser, tend to be this trope. In fact, the Fat Comic Relief is almost always a Big Eater. However, Big Eaters who remain thin despite their habits are considered the best examples.

Don't interrupt a Big Eater's meal, or worse, try to steal their food, as this is a very good way to piss the character off...

Although it's often Played for Laughs, serious examples and deconstructions are known to exist. For example, a Big Eater may be suffering from bulimia or overindulging as a symptom of deeper emotional problems.

Characterization wise it can also be used to fulfill the needs of many Required Secondary Powers adding depth to a trait commonly dismissed as a comedic quirk and make a character's abilities more believable. Characters with a Healing Factor, Super Speed, or the ability to change shape and size, don't have to flout the laws of physics, they can simply explain that the extra mass and energy come from their over the top eating binges. Magic users in general can use this trope and say that they cast from their calories, which would explain why mages are often rather thin characters (though obese wizards aren't unheard of).

In action series, this is often a trait belonging to the Kid Hero, Boisterous Bruiser or other types of high energy characters. Because many wild animals exhibit this in real life it's also a popular trait for Wild Child and Raised by Wolves characters.

In comics and manga it's become common to make a Comically Serious character or badass a Big Eater as a way to add a humorous quirk that doesn't take away from the character's seriousness. A common justification for a female big eater is that all the fat goes straight to her breasts. Consequently, female characters with big boobs are often big eaters. Occasionally they have Bizarre Taste in Food or are Obsessed with Food when not eating.

Truth in Television, though without proper exercise it can lead to obesity. People with higher metabolisms are better able to avoid weight problems caused by overeating and teenagers are known for being able to eat amounts of food that will make them fat if they continue to eat like that in their 20s and beyond. Vegetarians and vegans can come off as this - because vegetable matter doesn't contain a lot of calories, so they often have to eat larger portions of food in order to get enough calories. Most wild animals need to be this because they usually have no idea when or where their next meal will be, especially in harsh environments like deserts or the arctic.

See Extreme Omnivore for when someone doesn't limit themselves to things usually considered food. If two Big Eaters are pitted against each other it's an Eating Contest. For a villain that has this as their biggest vice (especially an obese villain), see Villainous Glutton. Players can invoke this trope in any video game where the characters have a Hyperactive Metabolism and eat food to heal their injuries. Characters who have this kind of metabolism paired with such an appetite often Never Gets Fat. Compare Really Fond of Sleeping, which has a similar attitude toward sleeping and also are themselves likely to be a Big Eater. Characters like this may have a Delicious Daydream or sing an Ode to Food. Not to mention that characters like these would absolutely destroy you in an eating competition.

Don't expect the question of how exactly they manage to compact so much material into the space of a human stomach to be addressed.