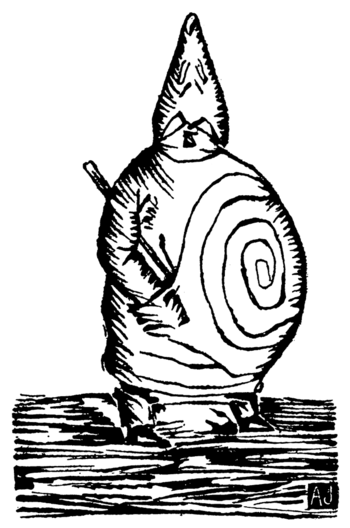 "Merdre."note The French word for "shit", with an added r.
— Père Ubu, the (in)famous first line of the play.

Ubu Roi (King Ubu) is a play by French playwright Alfred Jarry. It involves Père Ubu, a fat, greedy slob, who is convinced by his wife, Mère Ubu, to kill King Venceslas and become the king of Poland. He succeeds with the help of Captain Bordure, under the condition that he gets Lithuania. Upon being crowned, however, Ubu immediately begins abusing his new authority; he denies Bordure Lithuania and imprisons him, kills the nobles and bankers for their money and titles, and then raises the taxes to absurd levels and violently collects them in person. Bordure escapes to Russia, and gets Tsar Alexis to declare war on Poland to get rid of Ubu. But as Ubu prepares to fight the Russians, Bougrelas, the last surviving son of Venceslas, is preparing a revolt of his own, to free Poland from Ubu and avenge his family...

Ubu Roi evolved out of a schoolboy joke between Jarry and his friends, making fun of his physics teacher, Hébert; "Ubu" is likewise a distortion of "Hébert" (pronounced eh-BEH in French). His friends moved on, but Jarry continued and refined it, and it became Ubu Roi, a bizarre, comical play full of Vulgar Humor and idiosyncratic language, parodying Macbeth. When it was first staged at the Théâtre de l'Œuvre in 1896, it offended the audience enough to cause a riot.

It's a highly influential play, and a precursor to Dada, Surrealism, and Absurdism.