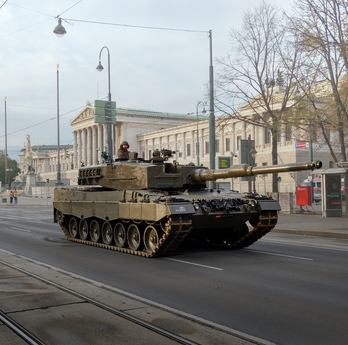 That, my friends, is the minority vote.
Faced with intractable national problems on one hand, and an energetic and capable military on the other, it can be all too seductive to start viewing the military as a cost-effective solution.
— Charles J. Dunlap, The Origins of the American Military Coup of 2012

Want to know how unpopular a leader of a country is? Usually, it goes no further than if even the leader's own military forces can't stand him and proceed to attempt to overthrow the ruler. At worst, expect the country to become a military junta (a state run by the military) afterwards, which is when the military plans to take over the existing government, ushering in a new empire under martial law.

Often, this is led by a power hungry General Ripper who believes the current administration is soft, and that their nation should eliminate all their enemies and suppress dissent with an iron fist. Expect the general's dream to be a new government based on "efficiency," where citizens are conscripted into manual labor to build for the new expansionist government, with any protesters being shot on sight or at least jailed.

Cue a threat that's got numbers, technology, and high power weaponry - these can range from just the leader and a few groups of soldiers covertly trying to take over to the entire armed force of the country going on full-scale attack.

On the flipside, this can occur due to genuine concern for the well-being of the empire, especially if their commander-in-chief and the nation's leader also turns out to be The Caligula. Given what Real Life leaders of military coups mostly end up doing, this isn't usually the case in Real Life.

Note that a military official beating a politician out of office by political means like the ballot box, even if said box was stuffed, does not qualify as a military coup. A military coup requires that the military force a change in who wields what power by militaristic or otherwise explicitly extralegal means, such as assassinations or fighting directly against them — modern constitutions do not legally sanction the Klingon Promotion. Military coups committed by the recognized leader already in power are also possible, provided the military is used by said leader for a power grab he shouldn't legally have; such "auto-coups" or "self-coups" might involve, say, a head of state unilaterally dissolving a legislative assembly that was meant to serve as a check on his power.

This can be Truth in Television. Most coup attempts in Real Life are either led by a military officer or someone with their backing—in unstable countries the military is often the only entity that has the organization, discipline, speed, and access to arms necessary to pull off a coup. All this is needed for a coup to work, as the more time that is needed to secure strategic points the more time a coup's opponents have to organize a response.

Subtrope of The Coup, which is the trope you want if it's not the military leading the charge. If this takes place in your country, it's Day of the Jackboot.

In a fictional central European country, a conspiracy of military officers attempts to topple the corrupt government. The results are nasty

In a fictional central European country, a conspiracy of military officers attempts to topple the corrupt government. The results are nasty