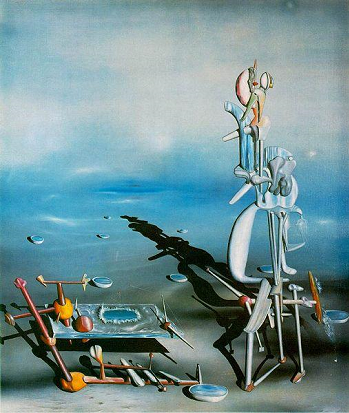 Trust me, it will get weirder than this.
“It was the end of sorrow lies. The rail stations were dead, flowing like bees stung from honeysuckle. The people hung back and watched the ocean, animals flew in and out of focus. The time had come. Yet king dogs never grow old—they stay young and fit, and someday they might come to the beach and have a few drinks, a few laughs, and get on with it. But not now. The time had come; we all knew it. But who would go first?”
— André Breton and Philippe Soupault, Les Champs magnétiques
Advertisement:

Surrealism was a movement encompassing both literature and art, originating in Europe between the World Wars. The aim was to make art that reflected the fundamental truth about the world; they took the name surrealism (the prefix sur- means “super”) because they considered themselves super-realists, the way earlier writers would consider themselves super-naturalists. To them modern cities and urban life had its own sense of the “uncanny” and “weird” as forests or dark woods would in fairy-tale landscapes. In this, they followed the influence of Sigmund Freud, whose psychoanalysis was the hottest fad of the decade, so the surrealists' super-realism was essentially art about the subconscious, as Freud envisioned it.

One major branch used very abstracted art to symbolically represent the subconscious. The other, better-known, branch attempted to more-or-less literally depict the strange logic of one’s dreams—this was the surrealism of Salvador Dalí’s melting clocks (see The Persistence of Memory), René Magritte’s flying men in bowler hats with apples on faces, and Elsa Schiaparelli’s shoe hats and exotic lobster dresses.

Due to the popularity of the latter branch, the definition of “surrealism” drifted. People remembered the melty clocks, but forgot they came from the subconscious, so for those outside the movement, “surreal” became a synonym for “bizarre and nightmarish”.

If the world looks mundane but Fridge Logic makes you wonder why people aren’t making more of a fuss about some of the stuff going on then it’s probably Magic Realism—which is actually a later offshoot of Dalí-style surrealism.

Compare Uncanny Valley and Eldritch Abomination. See also Surreal Horror and Surreal Humor. Compare and contrast Absurdism; both movements emerged in the wake of World War I and are stylistically similar, but whereas surrealism uses the bizarre to convey meaning, absurdism is all about embracing meaninglessness. Also compare the (anti)-art movement that preceded and inspired surrealism.