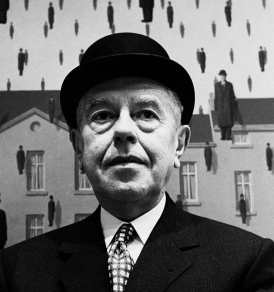 René François Ghislain Magritte (21 November 1898 – 15 August 1967) was Belgium's most famous 20th century painter. One of the icons of the surrealistic movement, he painted countless paintings with absurd images, many which have become famous, such as "The Treachery of Images" ("This is not a pipe") and "The Son of Man" (the man in a bowler hat who has a floating apple in front of his face).

This painter provides examples of: