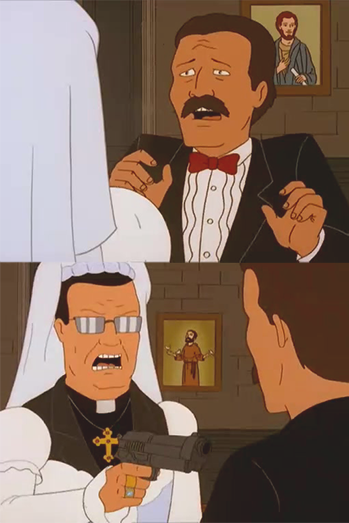 A young couple are all ready for the big day. Only the bride isn't who the groom thinks she is. Maybe it's an Arranged Marriage, and someone else is impersonating the bride he's never seen. Maybe a shapeshifting alien has taken her place. Or maybe she's simply using a wedding veil as a convenient disguise.

The wedding rarely if ever goes through, with the real bride (or groom, in gender-flipped examples) bursting in at the last moment. Very occasionally, the groom may fall in love with the "fake" bride and marry her for real. Legal trickery may establish that the false bride can be treated as the true bride's proxy, and so he really did marry the true bride. In many Fairy Tales, the false bride is executed for her attack on the true bride — sometimes substantially after the wedding took place — as a complication in the heroine's Rags to Royalty rise. (This is often a case of Sibling Triangle.)

Note that many of these rules are reversed if it's a villain who's trying to marry our plucky heroine for devious and evil reasons. In these cases, the villain often does end up married to the fake bride, usually for the sake of invoking some comedic comeuppance.

Compare Bed Trick, which is the less G-Rated version of this trope. Contrast Real Fake Wedding.

Has nothing to do with Bait-and-Switch. Necessarily.

"Every pony will gather round, say I look lovely in my gown. What they don't know is that I have fooled them all!"

"Every pony will gather round, say I look lovely in my gown. What they don't know is that I have fooled them all!"