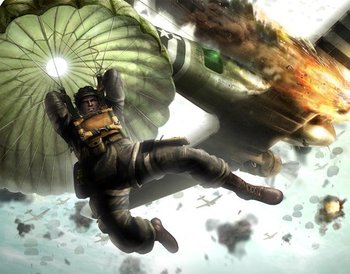 When the red light goes green, you jump. Follow the man in front of you. Don't stop. Don't think.
"We are droppin' into hell, troopers! Time to grow a pair!"
— Eddie Buck, Halo 3: ODST
Advertisement:

Simply put, people falling from the sky, or at least a great height, then landing safely, at least for them. This is accomplished in Real Life via parachutes or gliders, but in Speculative Fiction it can be done through Powered Armor, Jet Packs, special pods, or Applied Phlebotinum. Usually an airplane is involved, but balloons, cliffs, a Standard Sci-Fi Fleet, a tall building, or even a magic castle will do.

This trope is only very marginally related to the song by The Weather Girls from which it takes its name. (In the music video, several guys are shown parachuting in on the two singers... using umbrellas.)

A Super-Trope to Drop Pod, where the soldiers are dropped from orbit inside a disposable casing to survive atmospheric reentry.

Compare Fast-Roping, Drop Ship. Less than successful examples may result in a Parachute in a Tree. Contrast Death Flight.

Not usually related to It's Raining Salesmen.

Easy Company and the rest of the 101st Airborne drop into Normandy, under intense German anti-aircraft fire.

Easy Company and the rest of the 101st Airborne drop into Normandy, under intense German anti-aircraft fire.