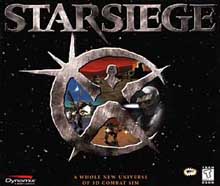 Little old peter, missing his liter, while Herky plays in the red. Down came the glitches and burned us in ditches and we slept after eating our dead. - Schoolyard chant, c. 2800.
"When the Dark Intellect escaped The Fire, man stood in the ashes of mother Earth. For 200 years the immortal emperor built Earth's armies... But only Earth's. Then the colonies of Mars and Venus revolt against unjust imperial law. Harabec, the greatest Imperial Knight, joined the rebellion. His brother Caanon led the Knights to Mars to suppress it. When Prometheus attacked again, human blood already stained the ground. Mother Earth lay helpless. The time of terror had indeed returned. I tell the story of the third and final coming of Prometheus. I tell the story of us all."
— Opening narration
Advertisement:

Starsiege is a mecha-style vehicle simulation game developed by Dynamix and released in 1999. It is set in the "Metaltech" universe, which contains its predecessors Metaltech: EarthSiege (1994), Metaltech: Battledrome (1994), EarthSiege 2 (1995), the Platform Game Hunter Hunted (1996), as well as the CyberStorm (1997-1998) Turn-Based Strategy games. There are two campaigns. One casts the player as a member of the human Martian resistance against an oppressive Earth empire, and the other as a Cybrid "pilot-form." The gameplay sees you piloting HERCULANs, or "HERCs", and tracked tanks. In between levels you configure your vehicle's components and select squadmates. Missions generally involve shooting other HERCs, tanks, turrets, and buildings.

Starsiege is also a game with a fairly rich back story, told through a "compendium" found in the box alongside the game manual, a rich text that deserves a page unto itself. Here's the basics: It is the year 2829. Earth is under a single unified Empire ruled by the Immortal Emperor Solomon Petresun. He has instituted the "Fortification Proclamation," a massive buildup of arms and defenses on Earth, at the expense of the colonies on Mars, Venus and the Moon. Why? Because he fears the return of the Cybrids, genocidal robots led by Prometheus―an artificial intelligence that Petresun himself created centuries before.

He has good reason to fear them, of course. The Cybrids, created by humans, rebelled against them. Twice, the Cybrids nearly drove humanity to extinction, as depicted in the EarthSiege games, and twice humanity overcame impossible odds and won. The first time they were beaten, the Cybrids fled to the moon, and then when they were defeated again they fled into the depths of the Solar System, regrouping near Pluto. There they watched, and waited for humanity to weaken. They got their chance when the colonies decided they didn't like being stripped of their resources and started a rebellion against The Empire. With Imperial police and military forces tied up fighting the rebellion, the Cybrids saw their chance to strike. A new siege began ― Starsiege.

Things get a little more complicated, of course, beginning with the rebels discovering a cache of ancient alien weaponry on Mars. Now the "pitiful" Martian rebellion is armed with nasty alien guns and has a chance of winning against the Empire. This is where the player comes in.

In-game, the story plays out through audio briefings before and after missions, and through pre-rendered cutscenes at certain significant points in the game. There is also a time-line feature, and news broadcasts, which update as the game progresses. These elements allow the player to see things about the story that can't be told through the simple shooting-oriented game-play. The Cybrid Campaign is a good deal harder than the Human one, and reveals a few interesting twists that the player would miss if one played only the Human campaign.

It must be noted that Starsiege's backstory performed a major retcon on the backstory presented by the earlier EarthSiege games, and although quite a bit of it can be justified as fleshing out the backstory, enough is incompatible between the two that you could safely put EarthSiege to EarthSiege 2 in their own separate continuity that was later copied, modified, and built upon for Starsiege and beyond. There are still arguments over which backstory version is better. The game received a pseudo-sequel in the form of Starsiege: Tribes, and that series subsequently underwent More Popular Spin-Off, cleaving itself from Starsiege in the same manner it separated itself from EarthSiege. Starsiege's backstory is still canonical for the Tribes series though.

The entire Metaltech franchise is currently owned by Hi-Rez Studios, the makers of Smite, Paladins, and GlobalAgenda, and they have happily made the entire Franchise (with the notable exceptions of Battledrome and the CyberStorm games), including this game, available for the entire internet as freeware!

You have no reason not to play it now, so get to downloading!

Starsiege and its sequels provide examples of: