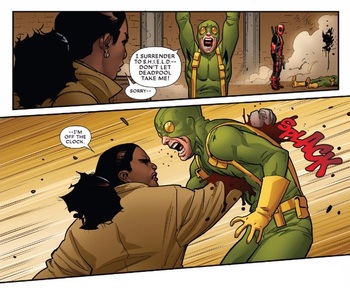 So, The Hero and his team are cornered by enemy forces on all sides. Do they fight their way out or at best make a Last Stand? No. Somebody in the group suggests they willingly surrender, claiming that this way, they'll live to fight another day. But what's this? Rather than being locked in an easily escapable cell, the heroes are either executed on the spot, brainwashed into new minions for the Big Bad, or suffer a Fate Worse than Death, or in this case, a fate worse than if they had fought back.

The reason this can happen varies: the villain could either be wise to how dangerous the heroes are, they could find this too good an opportunity to do away with the heroes for good, they might despise those who won't fight to the end, seeing them as Dirty Cowards, they might promise to agree to the heroes' terms of surrender, only to reveal they lied later on, or are just plain cruel and want to Kick Them While They're Down.

Needless to say, this is a Nice Job Breaking It, Hero moment for the one that suggested surrendering, usually the Cowardly Lion. To rub salt in the wounds, it could be revealed later on that the heroes actually had a fighting chance, and in rare instances, could've possibly won if they hadn't given up.

This can also apply to Hostage Situations such as Put Your Gun Down And Step Away, Hostage For Macguffin, and Friend-or-Idol Decision, where the hero gives into the villain's demand, only to find the deal had some details that weren't mentioned and the villain didn't intend to honor his half of the bargain anyway.

In some cases, the person who suggested surrendering was actually The Mole for the other side who had tricked the heroes into giving themselves up.

In rare moments, a villain can be on the receiving end of this. In this case, it shows that the heroes have become just as bad as the villains, especially if the villain in question wanted to defect to the good guys. The heroes may justify this as I Did What I Had to Do or that A Real Man Is a Killer. Alternately, if the villain has a history of faking his surrenders, the heroes may wise up and decide to frag him anyway; if they couldn't trust the villain to honor their surrender before, why do so now?

Similar to Pacifism Backfire where trying to avoid a fight causes a confrontation to intensify. A rare moment where Honor Before Reason is actually in the right. Not to be confused with I Surrender, Suckers or Poisonous Captive where the one surrendering is doing so as part of a plan, though the two can mix if the enemy sees through the scheme. Not the same as Stupid Surrender, where one surrenders without realizing they didn't have to. Can be the karmic fate of a Dangerous Deserter who tried to pull a Screw This, I'm Outta Here, resulting in Rewarded as a Traitor Deserves. Can go hand in hand with Leave No Survivors. Compare Run or Die or Captured on Purpose. Contrast Defiant to the End, Last Stand, and Stand Your Ground. You Said You Would Let Them Go is similar where one makes a deal with the villain for the safety of their friends, only for the villain to pull a double cross. For those who protest the notion of surrendering turn out to be in the right, see Strawman Has a Point. If the person who suggested the idea genuinely thought it was smart, that makes it It Seemed Like a Good Idea at the Time and Not Quite the Right Thing. See also Violence Really Is the Answer.