All spoilers from the first game will be unmarked ahead. You Have Been Warned! 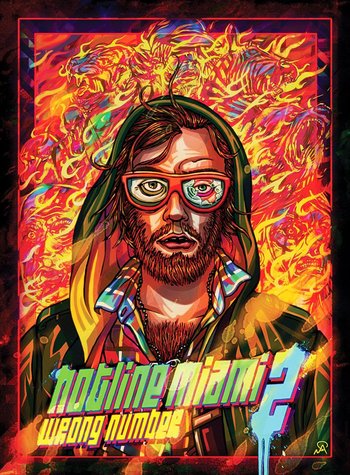 "You really like hurting other people, don't you?"
-*DEE-DEE-DEET*-

Hotline Miami 2: Wrong Number is the 2015 Sequel to Hotline Miami, made by Dennaton Games and published by Devolver Digital. The game was released for Windows, Linux, OSX, Playstation 3, Playstation Vita, and Playstation 4. A digital comic book serving as a prequel for the game began publication on Steam on February 17, 2015, providing background on the various characters and factions featured in the first and second games.

Set in an Alternate History version of The '80s and The '90s, Wrong Number serves as something of a Mind Screwdriver. Whereas the first game featured a Jigsaw Puzzle Plot that left several pieces intentionally missing, Wrong Number uses Pulp Fiction-style Simultaneous Arcs played in Anachronic Order to explore the backstory of the world and the aftermath of the first game, providing insight to some of the weirder plot threads as a result.

Originally envisioned as a quick piece of DLC for the first game to tie up loose ends, the levels and stories quickly grew to the point that it was significantly longer than the original, so it was decided to simply package it as a sequel and go all-out with the development. Feeling that they had basically perfected the series' core gameplay with the first title, the devs instead opted to explore what cool new things they could do with it. The result is a game that is significantly harder than its predecessor, with sprawling, intricate levels containing a more pronounced artistic flair.

Each character, as well, plays vastly differently, and gameplay remains constantly varied as a result - for example, one character is a Spec-Ops soldier who can use a knife and gun at the same time, but cannot pick up new weapons, while another is a Brother–Sister Team that moves as a single unit, with one firing guns while the other swings a chainsaw. Each character has their own storyline that connects to the rest, be it by coincidence or directly crossing paths, and the story mode takes place between 1985-1991, jumping back and forth to create a sense of gradually developing history to the world the game takes place in, and allows for a reasonable progression of difficulty in the levels.

open/close all folders
A-C
D-F
G-M
N-Z
You all came back, didn't you? Why?