Know When to Fold 'Em 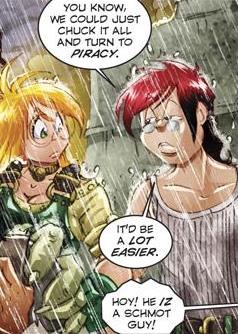 Sometimes, You Can't Fight Fate. And when things aren't going your way, it's good to know when to call the whole thing a wash and quit. After all, knowing when to just walk away is a useful skill. It may have even indirectly contributed to the creation of The Thirty-Six Stratagems as an actual list.

The Fatalist is quite aware of this wisdom. The Determinator, however, is not. The Determinator will rarely know when to back down, even when it would be beneficial; as such, not knowing when to quit will frequently be presented as a flaw for this kind of character. A Determinator who refuses to back down from a hopeless battle and gets their ass kicked is a very common and easy way to show that the threats are getting bigger, and that an iron-willed resolve isn't going to work against someone who can turn them into jelly. A Combat Pragmatist would see that sort of attitude as foolhardy; he'll fight as long as he can (and fight dirty, at that), but flees if it's clear that he's going to lose. Quitting while they're ahead also sometimes happens, with the rationale usually being that they're not going to survive a prolonged fight and would be better off using a temporary advantage as an opportunity to get the hell out of there.

This trope is known as "risk aversion" in psychology circles. As seen in the prevalence of this trope, it's often a useful evolutionary trait. It's why most people, when gambling, try to quit when they've made more money than they started with. After all, nobody ever got rich from getting a lead and then betting it all anyways.

Taking this trope too far can lead to Dismotivation when they decide that since You Can't Fight Fate, why bother doing anything? The Straw Nihilist THINKS he understands this trope, but in reality wouldn't even be sitting down at the table. The same is true of The Eeyore, who has already folded before the cards are even dealt.

Compare You Were Trying Too Hard, which is about situations where folding somehow causes you to win the pot. See also Screw This, I'm Outta Here; Villain: Exit, Stage Left; Opt Out; I Surrender, Suckers; Graceful Loser; I Will Fight No More Forever; Run or Die; Switch-Out Move; Sensing You Are Outmatched; Tactical Withdrawal. Contrast Sunk Cost Fallacy, which this trope tries to avoid, and Surrender Backfire. Compare with Dirty Coward and contrast with Rage Quit, which are more emotion-driven while Knowing when to Fold 'Em is strategically based, even though anyone who is willing to commit atrocities because he believes he has the upper hand and stands back because of biting off more than he could chew is a Dirty Coward by default. Also contrast with Leeroy Jenkins, who is pretty much the antithesis of this trope, and Attack! Attack! Attack!, where the character's determination blinds them to when it is time to give up. Compare and contrast the Determined Defeatist, who is a ZigZagged example, having the attitude of this trope, but who will press on anyway. Detrimental Determination is what tends to happen when somebody doesn't know when to quit, even when they should for their own sake.