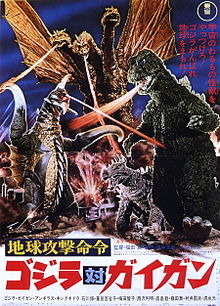 Godzilla: Hey Angurius!
Angurius: What do you want?
Godzilla: Something funny going on. You better check.
Angurius: Oh yeah!
Godzilla: Hurry up!
— Godzilla and Angurius's conversation in the... dub.
Advertisement:

From 1972, the 12th entry in the long-running Godzilla series, also known as Godzilla on Monster Island. It is the final film to star Haruo Nakajima as the King of Monsters. Godzilla must once again battle his old foe King Ghidorah to save Tokyo, and this time he brought a friend! It's also called Chikyū Kogeki Meirei Gojira tai Gaigan in Japan.

The plot revolves around a young manga artist by the name of Gengo Kotaka, who gets hired as a concept artist for a new theme park featuring a to-scale tower in Godzilla's likeness. He and his friends soon find out that the men running the theme park are in fact aliens trying to conquer the world with kaiju! These aliens are in fact giant cockroaches disguised as humans from some planet in Space Hunter Nebula-M. They plan on summoning & control a couple of monsters with "Action Signal Tapes". Our human heroes activate one of them by mistake, which brings the attention of Godzilla and his pal Angurius, who are just chillin' on Monster Island (in the only scene that actually takes place on Monster Island). They chat.

Angurius pays a friendly visit to Tokyo, gets shot at, and goes back to tell Godzilla what's up. The aliens summon King Ghidorah and a new monster, Gigan, who may prove to be Godzilla's deadliest foe yet. Godzilla and Angurius show up to confront the alien duo with the final battle taking place in the aforementioned theme park, where it turns out the Godzilla tower has a giant laser.

Followed by Godzilla vs. Megalon.