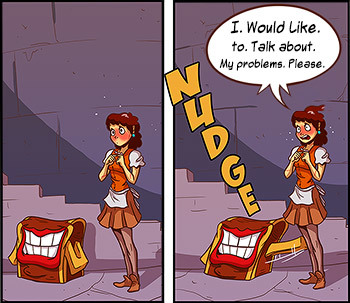 Every so often, one character just has to apply a little force to another to get him to start talking. There can be numerous reasons for this:

The reasons are different, but the remedy is the same — a good solid nudge to get him to speak up. The "nudge" need not exactly be a "nudge". It can come in other forms, such as a kick under the table or an elbow in the ribs. It may be accompanied by the nudger clearing his/her throat.

This trope can occur in a number of places. Some of the most common non-dramatic ones are in conversation or at a play when one actor has Stage Fright.

The inversion is a "Be Quiet!" Nudge. It is a subtrope of Hint Dropping and in cases where it is Played for Drama, may overlap with Please Wake Up.