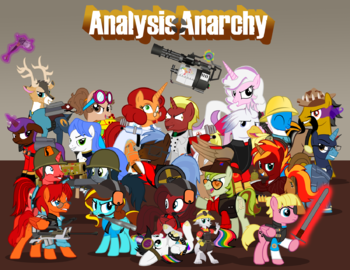 (a.k.a. TF2 Analysis Anarchy) series is a Web Animation that crosses over the MLP Analysis community and Team Fortress 2. It started as a series of "Meet the Team" parodies starring the analysts chosen to represent the classes. It culminated in "TF2: Analysis Anarchy"

, released in November 2014 which brought them all together. The series continued, under the name of TF2 Analysis, starting in February 2015, with the overarching plotline of recruiting members for the BLU team.

as the RED Soldier, Eliyora

as the RED Pyro, AnY Pony

as the RED Demopony, Silver Quill as the RED Heavy, Dr. Wolf

as the RED Engineer, Firebrand as the RED Medic, Voice of Reason

as the RED Sniper, and Gibbontake

as the RED Spy. Starting in "Star Search"

replaces Phantom Horn as the Soldier (the former had died). Also, as of "To Be, Or Not to Be"

, Gibbontake has resigned. He has since been replaced as the RED Spy by British Ninja

as of "Meet the Red Spy"

, after Ninja made an initial first appearance in "Help for Hire"

Members of the BLU Team have included Keyframe

as the Medic, Sweetie Bloom

as the Sniper, Lightning Bliss

as the Engineer, and Thespio

as the Spy. ToonKriticY2K was originally the Soldier, but later switched classes to Pyro

. However, as of late January 2018, he has been banned from the project and the MLP analysis community at large in the wake of him being outed as a sexual predator/pedophile, and his character was written out. ILoveKimPossibleAlot originally played the Scout, but was removed from the project due to conflicts with the rest of the team. The role of Soldier has been taken by Jasper Pie

as of "Saving Private Jasper"

, while Tyandaga later took up the role of Pyro

in July 2019, finally giving both teams a full roster.

Following the release of the "Red vs. Blue"

saga, multiple cast members left the series. AnY and Keyframe departed in "Aftermath"

, whilst Sweetie Bloom, Silver Quill and Ink Rose all left in "New Opportunities" (Part One)

. Replacements for their roles in the series have yet to be revealed.

As of "Pratically Perfect"

, Mary Sue, a parody of alicorn OCs and Mad Munchkin's roommate, joined the crew as the Announcer. In November 2018, The Abbey Roadie (or simply Abbey) became the crew's Spray-maker (an actual game mechanic where players can "spray" a custom image on a flat surface).

As for the villains, AntonyC

takes the role of the Administrator, Dustykatt

plays Miss Pauling. Lily Orchard originally played Grey Mann, until she was fired from the role due to conflicts between her and Josh. The Nightmare

confirmed that they have actors set for Redmond and Blutarch Mann. These were finally revealed as ACRacebest

and Saberspark respectively in "Red vs. Blue"

The "Meet the Team" videos are featured on the channels of the specific analysts. "Analysis Anarchy" and the 2015 videos can be seen on Dr. Wolf's channel.