Legacy of the Chosen 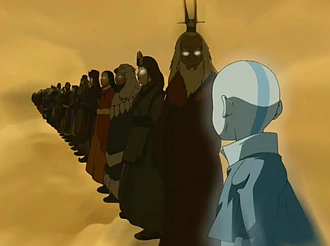 Almost 10,000 years worth of reputation to live up to. No pressure.
"Whenever righteousness wanes and unrighteousness increases, I send myself forth. For the protection of the good and for the destruction of evil, and for the establishment of righteousness I come into being, age after age."
— Bhagavad Gita 4:7-8
Advertisement:

The Chosen One in a work is rarely the first; more often than not, they're actually just the current incarnation. Either through reincarnation, bequeathal, fulfilment of prophecy or by any other means, the title is bestowed on a new character to carry that torch until the time comes to pass it on to the next. This allows for a varied and rich history of characters whose exploits are the stuff of legend; the current character bearing the chosen one's title may find inspiration in this, or they may question their worthiness; but in any case, the stories of past heroes is deeply meaningful and can justify the relevance of and reverence for the chosen within the context of the fictional world they exist.

When all of the chosen ones assume a singular identity, it overlaps with Legacy Character. Compare Eternal Hero and Greater-Scope Paragon. Compare The Chosen Many where multiple chosen are active at one time. Can result from a Master-Apprentice Chain if the bequeathal of the title has been passed down long enough.