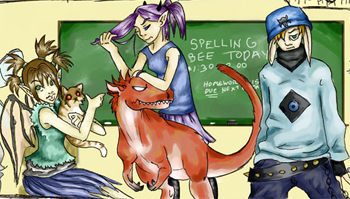 "I guess you could say it's not exactly your typical school."
— Shinigami-sama/Lord Death, Soul Eater
Advertisement:

The Extranormal Institute is a strange and/or wonderful place where bizarre is the new normal. It makes good internal sense (as opposed to farce played for laughs) and is genuinely functional (as opposed to a Crapsack World or the like), but has a very high weirdness level as real people deal with fantastical things.

Such a location is usually an important part of the attraction of whatever series it's featured in. Naive Newcomers (perhaps Strangers In A Strange School) can be expected to drop their eyes. The regulars may well be aware of their madhouse status and even proud of it.

Often, stories in such a setting will be in a genre (besides/in addition to the obvious sf/fantasy) in which the protagonists spend a lot of time exploring the details of the setting, such as School Story, Medical Drama, or Police Procedural. Of course, the contrast with the mundane aspects of that genre helps the bizarre details of the setting to stand out even further.

The Cool School is a Sister Trope, and Subtropes are mostly types of educational institutes, including:

It also has at least one exception to the above:

Contrast with Mundane Fantastic and World of Weirdness, where the entire world is like this (at least for the protagonists). Not to be confused with a School for Scheming, which appears to be this but is actually led by malevolent individuals or groups planning to exploit or manipulate the students.