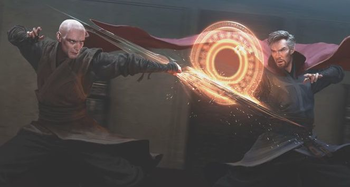 Man, the yahoos I scrap with never seem to anticipate [being punched in the face]. They all assume that what with me being a wizard and all, I'm going to stand back and chuck Magic Missiles at them or something, then scream and run away the second they get close enough to let me see the whites of their eyes.
Okay, granted, so that is how a lot of wizards operate. But all the same, you'd think they would remember that there's no particular reason why a wizard can't be as comfortable with physical mayhem as the next guy.
— Harry Dresden, using some Combat Pragmatism against an Outsider
Advertisement:

In one corner, you have the Squishy Wizard, supernaturally adept, but physically an utter weakling. In the other stands the Kung-Fu Wizard, who not only has supernatural powers but is also a skilled martial artist. In fact, their martial arts practice facilitates the use of their powers, and may actually be the source of them. This character can use both hand-to-hand combat and Functional Magic, magically augmented martial arts or blending them together until they're indistinguishable. The Kung-Fu Wizard is most often found in Chinese folklore, wuxia books and films, manga, and anime.

Sometimes they may overlap with Combat Medic. Because in reality, some religious figures such as monks were associated with supernatural powers but also (especially in the Far East) had a reputation for knowing or developing Martial Arts. Thus, someone who practices Martial Arts may also know a few things about exorcism, healing, or dealing holy damage. Or Buffs.

See also Magic Knight and Mage Marksman, where the wizard is trained in weapon-based combat rather than martial arts, Supernatural Martial Arts, where the kung fu is itself magic, and Full-Contact Magic, where the wizard doesn't actually know kung fu, but still needs to move around a lot to use magic. May be augmented via Meditation Powerup. If the setting states that Religion is Magic, then this may also be a case of All Monks Know Kung-Fu.

Mereoleona Vermillion is an incredibly powerful mage, fighting by concentrating an immense amount of mana in her arm and moving at superhuman speed.

Mereoleona Vermillion is an incredibly powerful mage, fighting by concentrating an immense amount of mana in her arm and moving at superhuman speed.