Fanfic / The Hill of Swords 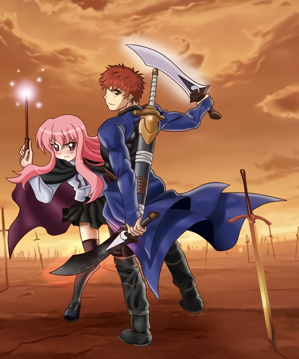 The Hill of Swords

Afterwards, the events begins to roll the same way than in the novels of Familiar of Zero, but with an important twist: the summoned Shirou is from after a hybrid Fate/Unlimited Blade Works route and is very well on his way to becoming his future Anti-Hero self. Broken, bitter and cynical, Shirou will search for the blond swordwoman on the hill of swords...

It ends up becoming more serious than the original The Familiar of Zero. The dynamic between Shirou and Louise is different from her original familiar and those who disliked the harem dynamics of Zero no Tsukaima will be glad to know that is all that has been cut out, except for the Rule of Funny.

Note well: as is the case with Gabriel Blessing's following major work, this fic is very divisive: its Fandom will gush over it and explain (in great detail) why they enjoy it, while its Hatedom will go to similarly great lengths in justifying their dislike of it. Please recite the MST3K Mantra before reading.

This Fan Fic is regarded as having revived the concept of "Let's have Louise summon a totally different person than Saito!"

Tropes contained in The Hill of Swords: