Manga / Blade of the Immortal 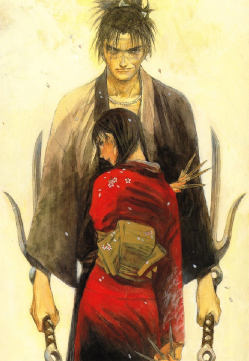 Blade of the Immortal (無限の住人 Mugen no Junin) is a Samurai epic by Hiroaki Samura, set in 18th century Edo period Japan, which tells the story of a girl named Asano Rin, and her badass bodyguard Manji. Manji is immortal thanks to an infestation of kessen-chu, sacred worms that pervade his system and knit together any injuries he sustains. He can die only by beheading or by coming into contact with a particularly rare poison. His goal in the series is to remove the curse of his immortality, which will happen if he kills 1000 evil men in reparation for the 100 innocents he killed as an outlaw.

Two years prior to the beginning of the story, Rin's father (a swordsmanship teacher) was murdered and her mother was brutally raped in front of her eyes by the members of the Itto-ryu: a renegade sword school led by Anotsu Kagehisa. Rin vowed to track Anotsu down and kill him in revenge, and so she hired Manji to help her fulfil her quest. The series follows Rin and Manji as they travel through feudal Japan, fighting members of the Itto-ryu and other enemies, and meeting comrades with questionable morality of their own.

Blade of the Immortal originally ran from 1993-2012, published in Kodansha's Monthly Afternoon seinen magazine. Kodansha partnered with Dark Horse Comics for an English localization. Unusually for manga, rather than use either the then-common practice of flipping the pages left-to-right for the English release (which can cause text errors), or publish the English version in the Japanese right-to-left page order (common practice nowadays), Samura insisted the pages be printed left-to-right with the panels rearranged, even partially redrawing many pages himself to facilitate this. From 2015 to 2020, Dark Horse reprinted Blade in ten three-book omnibus volumes.

Bee Train studio along with Production I.G produced an anime adaptation which saw a US release from Media Blasters.

A live action adaptation, directed by Takashi Miike was released in 2017.

A sequel manga titled Blade of the Immortal: Bakumatsu Arc is currently being published. As it name implies, the series takes place during the turbulent Bakumatsu era during the last days of the Tokugawa Shogunate. Samura is a collaborator, but it is written by Kenji Takigawa and illustrated by Ryu Suenobu.

In May 2019, a new anime, subtitled "Immortal", by Liden Films was announced

. It is currently streaming on Amazon Prime and will cover the entire manga.

Blade of the Immortal provides examples of:

Alternative Title(s): Blade Of The Immortal