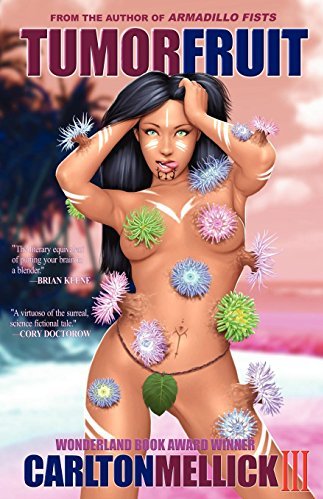 Island survival has never been this strange.

Eight desperate castaways find themselves stranded on a mysterious deserted island. They are surrounded by poisonous blue plants and an ocean made of acid. Ravenous creatures lurk in the toxic jungle. The ghostly sound of crying babies can be heard on the wind.

Once they realize the rescue ships aren't coming, the eight castaways must band together in order to survive in this inhospitable environment. But survival might not be possible. The air they breathe is lethal, there is no shelter from the elements, and the only food they have to consume is the colorful squid-shaped tumors that grow from a mentally disturbed woman's body.

From the crazy imagination of Bizarro Fiction master Carlton Mellick III comes Tumor Fruit - an intense survival story full of eccentric characters, nail-biting suspense, and the kinds of twists and turns that you'll only find in a Mellick novel.

It's what the television series Lost would have been if it had been darker, weirder, and a hell of a lot more insane.