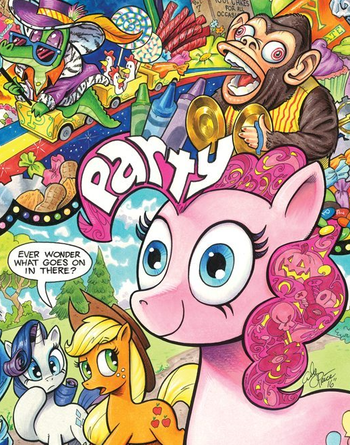 The inner machinations of her mind are an enigma.
"My mind is a puzzle to many."
— raocow
Advertisement:

A character with their head in the clouds. They are very cheerful and strangely oblivious to things that everyone else takes for granted. They may have an argument with themselves for fun, make points in an argument with no basis in logic or reality, or tell rambling stories that have nothing to do with the point they're trying to make. They make totally unintentional double entendres, and are great for Getting Crap Past the Radar. Sometimes also called "Space Case" or "Space Cadet", or plain old "Strange", a cuckoo clock chime is used as an indicator of one.

The concept is well known, as in this joke: "A neurotic is a man who builds a castle in the air. A psychotic is the man who lives in it. A psychiatrist is the man who collects the rent." — Jerome Lawrence

Cloudcuckoolanders are rarely malicious. They are far more likely to be the Plucky Comic Relief because of how much of a goofball they are. Maybe he's one of Those Two Guys or the crazy member of the Comic Trio. They lapse into non sequitur a lot, and while they aren't totally insane, they act it much more than some other crazier characters. They also talk like they're nuts as well by a speech pattern.

One mark of a Cloudcuckoolander is when, 90% of the time, you think the character is just plain nuts, but 10% of the time, you suspect that the character is in fact the Only Sane Man on the show. In other words, a Cloudcuckoolander has massive knowledge and understanding of the workings of the universe, but a poor way of communicating that to everyone else. Unfortunately, when they are smart, nobody else is, and when they are not, everybody else is. In any event, they can be oddly endearing.

They often come off as naïve, innocent and Sarcasm-Blind, so when they suddenly come up with snarky quips and witticisms, it may be one of the first indications that they are much more insightful than they seem (or even deliberately pretend) to be.

Another notable mark is that often there is nothing actually wrong with what they do, but it is most assuredly not something a normal person would do. Sit down with a Cloudcuckoolander and try to explain to them that normal people don't wear the clothes of a dead man. They will never understand what your problem is. It's not like the dead guy cares, is it? Likewise, they would fail to understand the reason for wearing shoes in a public place (it's warm and cozy, so why not go barefoot?) or using the pronoun "I" when referring to yourself (you use other people's names when speaking about them, so why not use your own name when you speak about yourself?)

Frequently clips entire stacks of Weirdness Coupons from the paper. Certainly, many of them get away with a good deal no one else would be allowed. And has a weakness for falling into a Wiki Walk.

Though they may overlap or go hand and hand with The Ditz, The Fool, or the Kindhearted Simpleton, a Cloudcuckoolander, by definition, isn't necessarily stupid. Some Cloudcuckoolanders can be highly intelligent, very insightful or even geniuses, it's just the things they sometimes say and do may come off as weird, awkward, clumsy, over-the-top, buffoonish, illogical and questionable, outright eccentric, goofy, etc. — and because imagination often runs wild, they tend to be Easily Impressed.

This character is a mainstay of Surreal Humor, Dada Comics, Widget Series, and Word-Salad Humor. Even in a series with a little more structure overall, the Cloudcuckoolander's wacky and bizarre antics will often be used for an easy gag, particularly when paired with a straight foil to drive insane. This is probably why there are so many Webcomics examples. This character will often be a Granola Girl or New-Age Retro Hippie.

When their weirdness delves into a disturbing territory, they have taken a job as a Nightmare Fuel Station Attendant.

Their native land is Cloudcuckooland.

If a Cloudcuckoolander is dangerous, then that is the answer to Beware the Silly Ones and/or Crouching Moron, Hidden Badass. If they fight for a random rather than heroic reason, see Classical Anti-Hero or Nominal Hero. Because of the humor value in doing so, they're more likely than most characters to be a Spanner in the Works that stops a seemingly unstoppable plan, leaving viewers wondering if they were aware of what they were doing. For that reason, when it's time for a show to get serious, these characters are likely to be killed or detained so the viewers know they won't be responsible for yet another Deus ex Machina.

The name of the trope comes from the city built on air above the Greek plain in Aristophanes' play The Birds, 414 B.C., whose ruler had quite a large mental gap between the dreamy, wide-eyed, idealistic Utopia that he imagined his city to be and the brutal totalitarian regime that he had actually imposed on it. He also came up with brilliant ideas like keeping people out of his city — a city you could only reach through the flight — by building a really, really tall wall around it. (We'll give you a minute to figure out why that wouldn't have worked so well.)note Subversion: Go high enough and there's no air, so, even for a city accessible "through flight", you need air to fly in.

If written badly or subjected to Flanderization, a character who was supposed to be merely weird may become The Ditz or a full-time Talkative Loon.

Lastly, when dealing with Cloudcuckoolanders, always remember that sometimes their ramblings aren't just ramblings. That's The Cuckoolander Was Right.

For more examples of this trope, both real and fictional, check out a thematic category

No Real Life Examples, Please!. There are several mental conditions that can result in this type of behavior but as mental illness is Serious Business in real life, providing examples would just be insensitive at best.