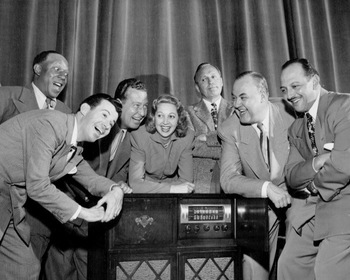 In its earlier years, the program was generally a Variety Show with sketches and music with an open. Later on, generally, The Jack Benny Program became a Sitcom about the production of The Jack Benny Program. Some of the action flashed back to what the cast had been up to that week, and some took place on the stage of the program, where Jack and the gang would try to put on plays and sketches, often taking the form of parodies of popular movies. Celebrity guests were not uncommon, and could be easily introduced as Jack's friends or neighbors in Hollywood. One long-term Running Gag was Jack's bitter "feud" with rival comic and radio host Fred Allen.

Recurring characters included Jack's Closer to Earth co-star Mary Livingston (played by his real-life wife Sadie Marks); his long-suffering African-American valet Rochester (Eddie Anderson); brash Southern bandleader Phil Harris; naïve boy tenor Dennis Day (and, earlier, Kenny Baker in a similar role); and rotund announcer Don Wilson, who tended to turn the conversation or the sketch to a discussion of the sponsor's product. Mel Blanc also did several characters, such as Polly the parrot; the malfunctioning Maxwell; the long-suffering violin teacher, Pierre LeBlanc; and the train station PA ("Trains leaving for Anaheim, Azusa and Cuc..."). Jack himself, portrayed as notoriously cheap and self-aggrandizing, usually played the comic foil to the other characters: the real-life Benny is famous for noting, "I don't care who gets the laughs on my show, as long as the show is funny."