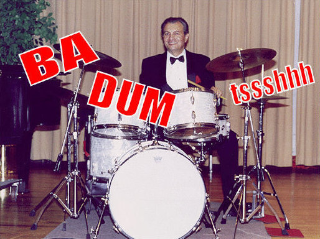 "Two drums and a cymbal fall off a cliff... *ba-dum-tssshhh!*"
— Bad joke
Advertisement:

That's it! Enough with the Self-Demonstrating Article! Stop that nonsense already!

Bob tried to make a joke, but it didn't turn out as good as he hoped. Maybe he shoehorned a reference in too awkwardly (shoe goes on, shoe goes off), or he has bad comedic... timing, or he just wasn't able to tell what was supposed to be a snappy joke in a snappy manner, so the wording he used ends up taking up way too much space for something that really wasn't worthwhile to anyone who was reading it in the first place. Or maybe he relied on a Stock Shtick that everyone's heard a million times. Not to fear! The drummer is here to punctuate the joke with a little percussion tag, letting the audience know that was indeed the Punch Line and they should laugh or at least give the Collective Groan.

Rimshots are associated with the Borscht Belt style of old-school comedy. It's a bit of an Undead Horse Trope: The rimshot is so kitschy that it's practically a Stock Shtick in its own right, but that in turn makes it corny enough that it can get a decent laugh if timed correctly, especially if it's used sarcastically to highlight a Lame Pun Reaction. It can even serve to salvage a joke that otherwise flopped.

For those who are not drummers, the "ba-dum-tssshhh" you think of when someone says rimshot is not a rimshot in percussion technique terms. A real rimshot is when you hit the edge of the drum and the head at the same time. The "ba-dum-tssshhh" is called a "sting". "Rimshot" somehow became show business slang and the rest is history.

You can also get a rimshot on demand here