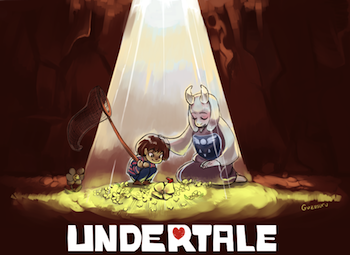 The Friendly RPG Where Nobody Has To Die.note Pictured, left to right: Flowey, the Human, Toriel.
Legends say that those who climb the mountain never return.
— Opening Monologue
Advertisement:

that raised $51,124note Over ten times of that of its original $5,000 goal!. The game and a demo are available on its main website here

Long ago, humans and monsters lived in harmony, but eventually that peace gave way to war between the two species. The humans emerged victorious and sealed the monsters underground Mt. Ebott, where they reside to this day.

The game tells the story of a young child who investigates a mountainside cavern in Ebott and falls down a deep hole, awakening on a bed of flowers in a dark and mysterious place. Now the child must find a way back home, encountering all manner of creatures along the way, ranging from friendly to hostile. Unfortunately for the child, King Asgore, leader of the monsters, desires their soul to break the monsters free, and has ordered his minions to capture them. And as the child soon learns, there is far, far more to this tale than it seems…

On October 31, 2018, the first chapter of the "sister game" (as in, not exactly a sequel) game Deltarune was released for free for Windows and macOS. It can be downloaded here