Film / Valerie and Her Week of Wonders 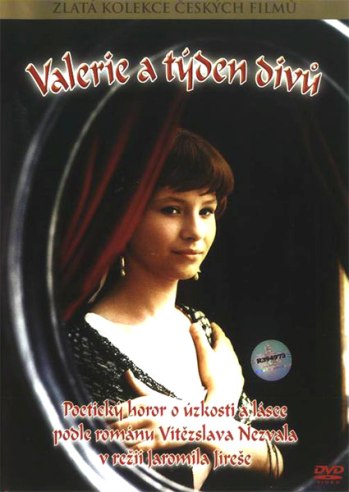 "It's nothing, only a man hanging."
— Orlík
Advertisement:

Valerie and Her Week of Wonders (the original title is Valerie A Týden Divů — "Valerie's Week in Wonderland") is a Surrealist Czech New Wave horror/fantasy film from 1970, directed by Jaromil Jireš. The plot, as far as can be discerned, concerns young teenage Valerie, who lives with her severely prim grandmother. Her earrings are stolen one night and then returned the next day, after which a strange and sometimes disturbing phantasmagoria commences.

This Cult Classic has garnered an alternative soundtrack courtesy of the band The Valerie Project who perform their score over the film at screenings, and has been referenced by other artists including Of Montreal and Broadcast.

Valerie and Her Tropes of Wonders: