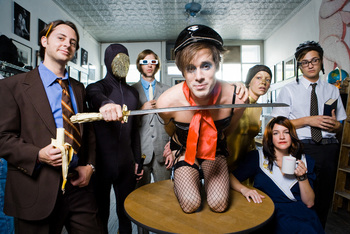 Of Montreal is a genre-bending indie group from Athens, Georgia.note Which while technically in the Deep South couldn't be farther from it in reality. It's a college town.
Advertisement:

Formed in 1996 by Kevin Barnes as a solo project, it began as folksy baroque pop like most other Elephant 6 projects. Derek Almstead and Bryan Poole (who frequently performs under the stage name The Late B.P. Helium) soon joined; the groups' first three albums featured this lineup, and the style continued until their fifth album, Aldhils Arboretum. Not only was it their first full-length record to not be a concept album, but it also introduced the dance-friendly style that set them apart from their Elephant 6 peers. This funkier sound kept on evolving on each record, and the group caught the eye of music critics with Sunlandic Twins, with one song from the album even being altered and used in a commercial for Outback Steakhouse.

Their next album marked an even more drastic change from their folk-styled roots. Hissing Fauna, Are You The Destroyer? was created almost entirely by Kevin Barnes to cope with psychological issues he was experiencing at the time, and featured enough Lyrical Dissonance to make "Komm Susser Todd" sound like "Hey Jude". It also gave birth to Barnes' alter ego, a Camp Gay black Transvestite Glam Rock star named Georgie Fruit. The next two albums, Skeletal Lamping and False Priest, both were predominantly written from the viewpoint and continued the bass-heavy pop sound of the previous album.

The band exemplifies the following tropes: