Music / Panic! at the Disco 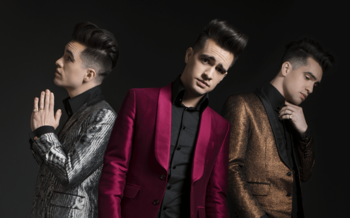 Panic! at the Disco is the solo project of singer-songwriter & multi-instrumentalist Brendon Urie. The name comes from a line in the song "Panic" by Name Taken, but due to the relative obscurity of this reference, the band usually cites the more familiar "Panic" by The Smiths, which contains the line "Burn down the disco" in its chorus.

The project started and grew popular as an eclectic pop rock band created in 2004 by childhood friends Ryan Ross (guitarist/main songwriter), Spencer Smith (drummer), and Brent Wilson (bassist), later joined by Brendon (lead singer) and Jon Walker (who replaced Brent in 2006). They were discovered by Fall Out Boy's bassist Pete Wentz and signed to his vanity label, Decaydance.

In July 2009, Ross and Walker left the group to form their own band, The Young Veins, and were replaced by touring guitarist Ian Crawford (formerly of The Cab)note Though he left not long after that, only to be replaced by guitarist Kenny Harris, who was himself fired in September 2018 for numerous sexual misconduct allegations involving underage fans and bassist Dallon Weekes (formerly of The Brobecks, now in I Don't Know How But They Found Me). Weekes officially joined the band as a full-time member in 2012, only to cease studio contributions in 2015note he remained a touring member until December 2017, and with Smith quitting earlier that year, that left Brendon as the only official member of Panic! at the Disco.

As a result, Panic! is now widely considered - by audiences, the media, and Brendon himself - to be Brendon's solo endeavor, as he now writes/co-writes all the songs and plays all the instruments, with some contributions by studio musicians & music producers.

Pre-2016, the band was known for their quirky fashion sense, rampant stage gay antics, witty lyrics, and longer-than-life song titles (which were initially made as jokes but later abandoned for more traditional-length titles after Brendon began forgetting them onstage). They are (or rather, Brendon is) now more famous for theatrical performances and aesthetic and a general shift in sound towards danceable pop with jazz influences. One trait consistent through both phases of the project is Brendon having a vocal range

to rival Freddie Mercury.note Appropriately, they covered "Bohemian Rhapsody" on the Death of a Bachelor tour.

Despite having moved away from any technical connection to emo music, they're often grouped by their fans as part of the Holy Emo Trinity, along with Fall Out Boy and My Chemical Romance. They're also often included in the "Fueled-By Five" (five bands from their label, Fueled by Ramen), which also includes Fall Out Boy, The Academy Is..., Gym Class Heroes, and Cobra Starship.

Popular songs include "I Write Sins Not Tragedies", "This Is Gospel", "Emperor's New Clothes", "Say Amen" and "High Hopes".

I Write Tropes, Not Tragedies:

"Hey Look Ma! I Made It" illustrates the highs and lows of celebrity through a Muppet version of Brendon.

Example of:
Celebrity Is Overrated

"Hey Look Ma! I Made It" illustrates the highs and lows of celebrity through a Muppet version of Brendon.