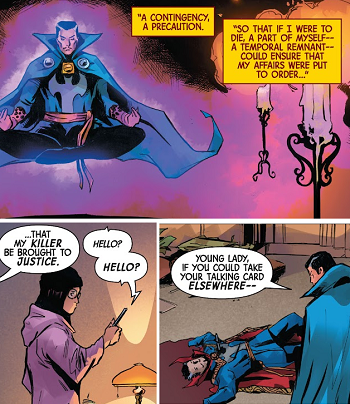 The protagonist has been murdered and is either dead or soon will be. The rest of the story concerns their efforts to solve the crime in the time they have left. A subplot can also be their trying to protect a loved one from the killer who did them in. This can be supernatural or non-supernatural depending on whether the protagonist is already dead or dying slowly but inevitably. If he or she is already dead, may involve Near-Death Clairvoyance, otherwise may be considered a form of Death by Origin Story. They may also possibly be hanging around as a ghost with Unfinished Business, hopefully a Friendly Ghost but a decent chance of the unfriendly kind.

A common science-fictional version involves characters who have the ability to back themselves up, through Brain Uploading or some similar technology. This is often used as a way to get around the issue that most victims know who murdered them: the version of the character that's trying to solve the murder is only as up-to-date as their most recent backup, which means they naturally have no memory of the murder or anything immediately before it.

Compare Discovering Your Own Dead Body, as this tends to be part of the evidence in the case. Contrast The Dead Guy Did It, when the deceased was the killer.

Not Dead Yet
Comic Books

Alternative Title(s): Whodunit To Me