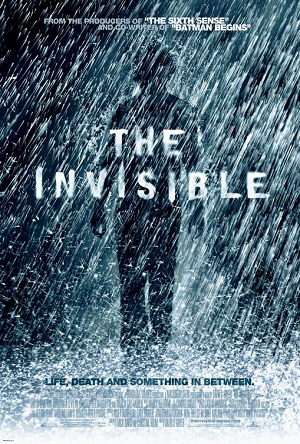 The Invisible is a 2007 Foreign Remake of the Swedish film Den Osynlige starring Justin Chatwin and Margarita Levieva: Nick Powell, rich and bored and almost done with high school, hates his life. His mother has his career all planned out for him, but he would rather run away to London and study creative writing - he has even bought a plane ticket. Meanwhile, his best friend Pete owes a debt to thief and gang leader Annie Newton. When someone sells Annie out, she suspects Pete, who decides to pin it on Nick, thinking that Nick has already left for London. Except Nick has decided not to go...

Not so much a mystery or a thriller as a beautifully shot character piece, all mists and gray skies of the Pacific Northwest, with cruelly effective imagine spots, Character Development and a Bittersweet Ending.

The Invisible was the last film to be released by Hollywood Pictures.

The Invisible contains examples of: